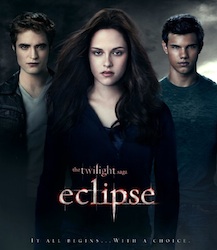 Eclipse was my favorite of the four Twilight books because it had a little something different going on. Victoria stepped up her game against Bella by creating the newborn army. There was cool backstory from Rosalie and Jasper along with a telling of the werewolf history (which in the book ran a little too long). Best of all was the training for, and the big battle with, the newborns. That’s what I came to the film version for.

Thank goodness the filmmakers did good by these story elements, especially the the battle which didn’t have the cheesy quality some of the special effects in this series have had. It was critical to my enjoyment that this turned out well because the usual whining and angst in the Bella-Edward-Jacob triangle is boring. In this instance it felt like the filmmakers knew they had enough other things going on that they didn’t bother to breathe some life into this part of the story. It’s the same as it ever was…Bella loves both, Edward slightly more and the two boys posture against each other trying to prove who loves her more.

One note on the casting. It was a bad choice for the producers not to keep Rachelle Lefevre as Victoria. Bryce Dallas Howard may look similar in the red wig, but Victoria is a different character here. Lefevre’s Victoria was a fierce bad-ass whereas Howard, even in her final showdown with Edward, just doesn’t seem to have the fire for revenge.

This is my off-ramp for the Twilight Saga at the cineplex. I hated Breaking Dawn as a book. It was bloated and overwrought and since the filmmakers are going to bring every last bit of that bloated story to the screen I’m not going to participate. The film would’ve been the chance to edit Stephanie Meyer’s narrative into something more cohesive, but clearly that’s not happening since it’s being done as two movies. I might catch it on TV at some point, but odds are that I’m just going to be done and not put myself through the torture of Breaking Dawn again.