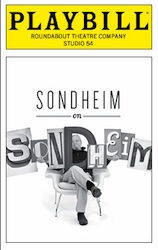 Not only does Sondheim on Sondheim feature some of Stephen Sondheim’s most well known works, it also features songs that were cut from his hit shows. Add that to commentary and insight from the man himself culled from recent interviews and from historical archives and you’ve got a show that resembles something between a Sondheim master class and an episode of PBS’ American Masters.

Sondheim on Sondheim is far from a simple revue or a repackaging of songs (as with the case with the 1999’s Putting it Together, which ran for just 101 performances). This show digs into how Sondheim works, who he’s worked with, how songs are put together, taken apart and reassembled. Sondheim lays all this out to the audience via video monitors that are used to great effect as the show’s scenic elements.

There’s also an incredible cast of eight to sing his songs. Headlining are Barbara Cook, who has done many Sondheim shows and concerts, Vanessa Williams, who played the Witch in the 2002 Into the Woods revival and Sondheim newbie Tom Wopat. Add to that Euan Morton, Norm Lewis, Leslie Kritzer, Erin Mackey and Matthew Scott and you’ve got an unbeatable collection of talent to take on this music.

There are some really delightful insights into the shows. Take 1970’s Company, we see how the end of the show morphed from “Multitudes of Amys” to “Happily Ever After” to the show stopper “Being Alive” (wonderfully done here by Norm Lewis). From Gypsy there’s a Mama Rose song cut from Act 2 called “Smile, Girls.” There’s a good reason it’s cut too, it would’ve slowed Act 2 way down…Sondheim tells the audience that and hearing it you know he’s right. From Road Show (which was titled Bounce at one time) we see how a song went from being sung from the older brother to his girlfriend to being sung by the younger brother to his boyfriend.

There are many powerful performances in this show. Tom Wopat was amazingly good in “Epiphany” from Sweeney Todd. Barbara Cook tore my heart out with songs from Passion as well as “Send in the Clowns” from A Little Night Music. Meanwhile, Vanessa Williams was a hoot in a song that was written for the 1978 London version of Follies called “Ah, But Underneath” (you can see this in the video clip below). The ensemble got a great chance to shine with “Something Just Broke” and “The Gun Song” from Assassins.

Sondheim on Sondheim was a wonderful afternoon of music and some great education on one of America’s best songwriters. If you’re in NYC you should see this before it ends its limited (and extended) engagement at the end of the month.