It’s week 10 and that means it’s time for the finals. It’s come down to Nicole, Erin and Evan and each had some surprises in store during the show. Unfortuantley some of those surprises were not good.

Each couple did two dances during the Monday performance show and still had two more judged dances to do in the Tuesday finale. For the Monday show each had to do a redemption dance–a style the judges felt the celebrity should do over because it wasn’t so good the first time–and a freestyle. Freestyle are such a mixed bag for me. As I’ve written before, to me the freestyle is the final exam and time to show the breadth of what you learned on the show. It’s not the time to go crazy and go off the rails to do something unrelated to DWTS. I got a mix bag this season, some I loved and some I did not. 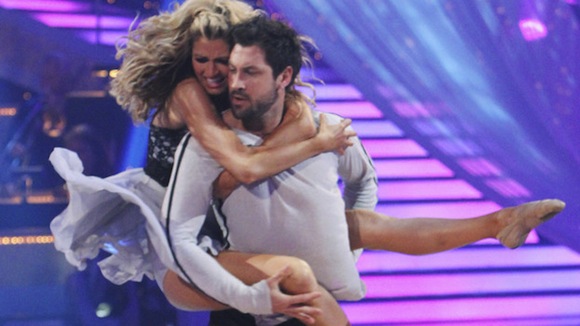 Prediction: Nicole wins this hands down in my opinion. Evan, however, had enough issues in the Monday show that I think he will come in third and Erin’s spectacular performance on Monday will get her into the number two slot.

Winner: As expected Nicole won the mirror ball (congrats, Nicole!). While I haven’t seen the finale yet, unless Evan pulled out something spectacular, I’m disappointed he came in second to Erin’s third. I’ll talk more about the finale program after I watch it Wednesday night.

The finale: As usual the finale was a mixed bag. The opening number was a mish-mash and ending with Kate, who looked like she didn’t want to be there at all, was lame. I’m glad Tony doesn’t have to deal with her any more. I loved that Nicole, Erin and Evan all redid their Argentine Tangos because they were so great. I still feel like Evan’s could have been more and that Erin should’ve come in second there.

I loved Pam and Nicey’s dance and it was my favorite new thing in the finale. Making Buzz dress up in a sparkly space suit and “beam” in to the dance floor was lame and embarrassing. Of all the other returning cast, the only other one I was happy to see was Shannen back with Mark and doing something new. The ending to the college competition was great and Utah definitely deserved the win there. Their number was incredible.

Now it’s time to move on to So You Think You Can Dance. The blogging for that will likely start up during the Vegas episodes.