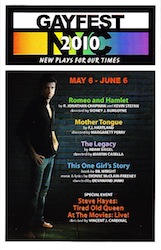 But soft, what light through yonder window breaks?
It is the east, and Hamlet is the sun.

Hamlet is the sun? What? Welcome to Romeo & Hamlet, written by R. Jonathan Chapman and Kevin Stefan using a mix of their own words, original Shakespeare lines as well as altered Shakespeare text like the above. The show, making its U.S. premiere as part of GayFest NYC 2010, merges Romeo & Juliet with Hamlet to put its own spin on Don’t Ask/Don’t Tell and gay marriage.

Here’s Juliet is supposed to be wed to Hamlet in a plot by King Claudius to unite Verona and Rome. The montagues aren’t a family here, but the gay society in Verona. Romeo, the leader of the monteagues, along with Mercutio and Benvolio, attend a ball where Hamlet and Juliet meet. However, things take a turn when Hamlet and Romeo lock eyes on each other. The two end up married in a secret ceremony. Hamlet still uses a show to help uncover who murdered his father (who it turns out was a montague too). Juliet, meanwhile feels spurned that Hamlet has gone to Romeo and when she tries to kill Romeo she drowns in the river. The king uses her death as a reason for Romeo and Hamlet to fight to the death. Of course, a plan is set in motion to make it look like Romeo is dead, but that plain goes awry leaving Romeo, Hamlet, the King and many others dead. 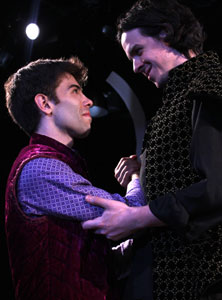 The duo playing Romeo and Hamlet were excellent. Chris Bannow (on the right side of the photo) played a wide-eyes, head over heels in love Romeo while Craig Wesley Divino is a Hamlet who is both madly in love both also driven to prove that Claudius murdered his father. These two had great chemistry on stage from the first starstruck moment at the ball to a West Side Story infused duel. You want their love to work out, even though you know that just doesn’t happen in a Shakespeare tradgey.

The supporting cast is excellent also. Phillip Taratula and Maechi Aharanwa were magnificent as Rosencrantz and Guildenstern. Meanwhile Amy Jackson and Eve Danzeisen were hysterical as Mercutio and Benvolio. Queen Gertrude was a wonderful Kate Levy and Juliet was played by Ellen Adair, who has played the Juliet in several productions of the original play.

The playwrights are to be commended for their skillful meshing of the original texts with their own. Every now and then it came close to being over the top (such as too many riffs on “to be or not to be”). Some in the audience for the performance we were at (which happened to be the closing performance) found more humor in the word play than I did. Yes there was some genuine humor there, just as Shakespeare intended. However, some of the audience laughter seemed misplaced, as if how the words were rearranged was itself funny.

I think I was taking most the show at its tragic face value because I did find there to be quite a bit of poignancy to the proceedings. It was a delightful, and at times quite powerful, retelling of two Shakespeare masterworks with a nice layer of modern day issues added to the mix.