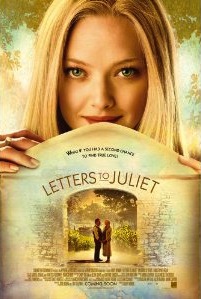 Letters to Juliet made for a delightful afternoon at the movies. The movie lived up to the expectations of being a lovely, romantic tale of lost love found again.

It was wonderful to watch Vanessa Redgrave light up the screen. As she road tripped round Rome looking for the man she stood up 50 years before she was warm, genuine and radiated hope while enjoying the adventure of it all. How’d she end up on the adventure? After Claire left Lorenzo waiting, she put a letter on the wall at Juliet’s house in Verona. Fifty years later, the letter was discovered behind a brick and answered, bringing Claire back to Rome. (This isn’t something Hollywood made up either, people have been leaving notes for decades. Check out this story from USA Today.)

Claire’s letter was answered by Sophie, an American traveling with her soon-to-be-husband who is too obsessed with his restaurant business to get involved in anything  Sophie might be doing. Meanwhile, Claire is escorted by her grandson, Charlie, who thinks the business of finding Lorenzo is ridiculous… at least until he starts to fall for Sophie.

Amanda Seyfried (most recently seen in Dear John) and Christopher Egan (from the dragon movie Eragon and more recently NBC’s failed series Kings) star as the modern day lovers who might miss each other if they don’t pay attention to what’s growing between them. To me their story is the C story of the film, with the main story belonging to Claire and the B story being the road trip itself. A good deal of screen time is spent traveling with Redgrave, Seyfried and Egan and they are simply sublime to watch.

Can soul mates come together again after a lifetime apart? Does true love always win? This story makes you believe and that’s a good thing for a late spring day.