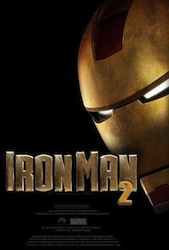 The summer movies season is officially underway this weekend with the opening of Iron Man 2. The original Iron Man opened two years ago and it was good summer movie material (see what I wrote on that opening weekend) and the sequel is more of the same.

This time Tony Stark has been protecting the world as Iron Man for some time. The government wants his suit. The son of someone his father crossed years ago is looking for vengeance. A competitor is trying to take Stark Industries down. And, oh yeah, Tony is slowly dying because of the very heart he created to keep him alive. There’s a lot going on in this movie. Luckily it’s all strung together pretty well. I felt it got a little slow at times, but on the whole it kept moving pretty well.

One of the things I liked a lot was the Stark Expo. Tony’s father started it in the 70s and it looked like a cross between the World’s Fair and Epcot Center (and it even had an intro film that looked like something Walt Disney did as he explained his vision for Tomorrowland). The Expo was set in the old World’s Fair area out in Queens and that was fun to see New York used like that.

Mickey Rourke is onboard as the primary villain, Ivan Vanko. Vanko’s used his father’s designs for a power supply and created his own that he wants to use to bring down Tony Stark. Eventually he joins forces with Stark’s corporate rival, Justin Hammer (played by Sam Rockwell, who is way too smarmy in this role), to build his own suits to get in with the Pentagon. Of course, Vanko has other ideas and turns all the weapons on Iron Man, making for one great firefight over the Expo Grounds.

The movie continues to set up the Marvel Avengers universe. Samuel L. Jackson is back as Nick Fury. Scarlett Johansson is introduced as Natasha Romanoff, a S.H.I.E.L.D. agent who works inside Stark Industries. There’s also a small nod to Captain America. Stay through the credits for a look at what’s out in the New Mexico desert…it’s a small set up for next summer’s Thor.

The returning cast continues to be great. I wish there’d been more time for Robert Downey Jr. and Gwyneth Paltrow to banter between themselves because they are a lot of fun to watch.

I figure in May 2012 I’ll be writing about Iron Man 3. Hopefully it will be as good as this one.

There was a super cool trailer ahead of this movie: Super 8 from director J.J. Abrams and executive producer Steven Spielberg. It looks like it might be a prequel to Cloverfield. Even if it’s not I’ll be there because this very simple trailer looked creepy, suspenseful fun.