Trying to do 30 miles after being away from biking for three weeks is not a good idea. Why three weeks of no riding during training months. Well, one week the bike had tire issues and then two weeks I was in Alabama taking care of mom.

Today’s ride was more difficult than I expected. When I heard the 30 miles were going to be in Manhattan, I thought I could handle it, especially since part of it included a loop in Central Park, ground I had covered before. Unfortunately, from the start, I had a hard time keeping pace and the longer the ride went, the worse my pace got. I felt bad for the ride caboose because I was way behind the rest of the pack. 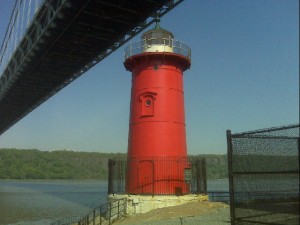 I also didn’t complete the course. When we got to the George Washington Bridge we paused for a moment. It was only a few miles from the end of the most northern point we were going to reach, but there were two hills between the GWB and the turnaround point. Out of our group of 18, I elected to stay behind and pick up the ride for the return to the start point. There was no way I was going to make those hills in the condition my legs were in. At least I got to check out the Little Red Lighthouse, which sits under the GWB. I didn’t even know that it was there, much less that it was the subject of a children’s book.

At the end of the day, I did just over 25 of the 30 miles. If you add in the trip to and from Chelsea Piers, I did rack of just over 31 miles for the day. It should have been closer to 36 for the day.

May is Bike Month NYC and I’m going to ride as much as I can to get back on the right training track. The first Saturday in June is a 40 mile ride and I want to succeed on that course–both in completing it and for keeping a better pace.

Quick update: Here’s a picture of the people I rode with as we all stopped at the lighthouse: 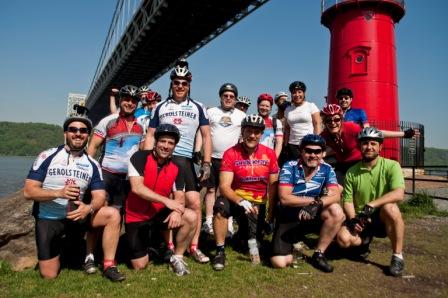