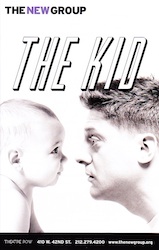 We travelled off-Broadway for our anniversary show (Saturday was the 15th anniversary of our first date). The Kid is a new musical based on the 1999 Dan Savage book The Kid: What Happened After My Boyfriend and I Decided to Go Get Pregnant. The musical, like the book, chronicles the efforts of Dan and Terry to adopt a baby through open adaptation, which is where the birth parent(s) can pick the adoptive parents and still be involved in the child’s life.

It’s not an easy road for them to take. As the first act depicts, the adoption process involves a ton of paperwork, in-home visits and a lot of time. At the end of the act, Dan and Terry find out they’ve been picked by a birth mother, which leaves the second  act to playout the months of getting to know the birth parent and the drama of if she will or won’t actually give them the baby when it’s time to do so.

Savage’s book proved good fodder for a musical as it has a lot of drama packed in to it. Dan and Terry go through so many emotions during the adoption process, the story could focus on them alone. However, you also get a lot of story about birth mother Melissa, who is a 19 years old, homeless and did a fair bit of drinking and drugs before she knew she was pregnant. There’s also the potenital for them to lose the baby as the father drops back into the picture. 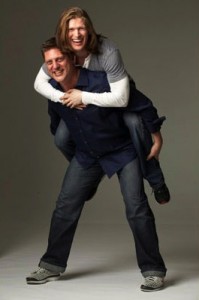 This production boasts a stunning cast, led by Christopher Sieber (a Tony nominee for Spamalot and Shrek) and Lucas Steele as Dan and Terry. These two had great chemistry together. It was easy to believe they were a loving, stressed out couple about to change their lives forever. There’s a solid supporting cast here with Jill Eikenberry (L.A. Law), Susan Blackwell ([title of show]), Ann Harada (Avenue Q) and  Brooke Sunny Moriber (Broadway’s The Wild Party). Blackwell has some particularly moving scenes as she is the case worked assigned to the adoption.

The show’s creators include a couple who are relatively new to the genre. Michael Zam wrote the book, Jack Lechner wrote the lyrics and Andy Monroe wrote the music. Zam has primarily written screenplays while Lechner is writing for theater for the first time. Monroe is the veteran having created musicals for over a decade. The trio won the 2009 Jerry Bock Award for Outstanding Achievement in Musical Theatre for their work on The Kid.

I liked all of the songs in the show, but there are three that deserve special mention. “If You Give Us Your Baby” details the letter Dan and Terry have to write to the birth mother explaining why they should be picked. It’s hysterical to start as Dan struggles to come up with the image of who they are writing to and then it turns moving as he gets down to writing the actual letter. “I Knew” is from Dan’s mother as she helps him come to grips with being a parent. “42 Hours” covers the tormenting time between the birth of the baby to the time that Melissa will ultimately decide if she’s keeping the baby or giving him to Dan and Terry.

The Kid is scheduled to run through May 29 at Theatre Row. Hopefully it will have life beyond this run as it was a wonderful show that looks not only at gay couples but the stress that can be the adoption process.