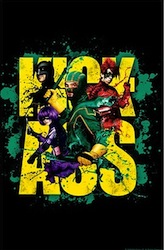 Checking out the IMDB entry on Kick-Ass I found exactly the words that sum up this movie as the title to one of the user reviews:”Spider-Man and Kill Bill had a baby and its head popped off!” This was one cool movie that mixed just enough teenage agnst with the desire everyone has to be a superhero plus some great comedy and a generous helping of Tarantino-esque violence and blood.

The movie centers on Dave Lizewski, your typical invisible high school student who fits into no particular clique and has a couple of friends who are the same. After getting bullied and seeing a by-stander turn a blind eye, he decides to become Kick-Ass. He meets up with two other “superheroes” Big Daddy and Hit Girl, who happens to be Big Daddy’s 11-year-old daughter. Kick-Ass soon gets in over his head and he gets wrapped up in the vendetta Big Daddy has over the city’s most corrupt crime kingpin. It’s far more than a high school kid, or an 11-year-old, should be dealing with… but deal with it they do in a most extraordinary fashion.

I loved Nicholas Cage in this movie, and I haven’t said that about him in years. First of all the character is crafted cleverly–a father trying to take care of his little girl while also getting vengeance for the death of the girl’s mother. Of course, it’s not good parenting to teach your young daughter how to fight and kill people, but this guy sure makes it look like the most normal thing in the world. Cage plays this complex character very well. I really love the voice he puts on when he’s in the Big Daddy costume (which looks very similar to a Batman suit). He sounds like something between Adam West as Batman and William Shatner over acting.

It can be disturbing watching young Chloe Moretz (she was seen in last year’s sleeper hit (500) Days of Summer and on TV in Dirty Sexy Money) take on the bad guys and girls, not to mention hear her spout off some of the language she get’s to say. I did wince at times as this youngster took on over a dozen baddies with guns. I think you’re supposed to feel that way too. This is not wonder-twin-powers-activate, this is a girl whose got good training but no real powers and is very definitely in danger.

Everything about this movie was fun with just that tinge of disturbance, which is the same feeling I get when watching something like Kill Bill or Grindhouse with its major violence. But it combines into a great movie experience. This is a superhero movie that is definitely not for kids, but the teens and adults should have a great (and, yes, kick-ass) time.