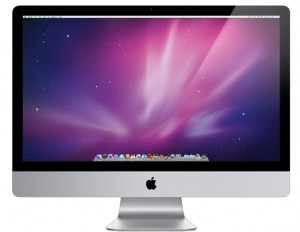 Yesterday evening, somewhere around 9:00, I unplugged the desktop PC and removed it from the desk. In it’s place (and taking up less space) is a shiny new iMac.

I’ve always embraced Mac and have used them periodically for work over the years (even back in the early days of Mac (or Macintosh as it was then) I used them to help produce a glossy magazine in college–in 1990). I’ve never had one at home though. It seemed like a lot of trouble to covert all those PC files.

The conversion was finally forced because the Windows XP-based desktop got a nasty virus. While I was able to get the virus out, the computer was never quite right after, requiring almost a daily reboot and the performance was awful across the board. In trying to fix the performance issues, I managed to make things worse. So it was off to the Apple Store on 14th Street and then home with a iMac, which has specs that exceed the four year old PC by a lot.

I got done with most of the exporting and setup last night (the only Microsoft software on here is the MS Office 2008 Home package). There are still some things to rescue off the PC and I’ll work on that over the coming week. In the meantime, it’s good to be in the Mac club!