The Ride: Braking the Cycle Training #1

It was a big biking day today!

While I’ve been working toward today’s ride for a couple weeks now by extending my morning commute, it didn’t prepare me as well as I’d hoped for this morning.

Today’s ride was 20 miles going from Chelsea Piers to Brooklyn’s Grand Army Plaza and back. Also included were two loops through Prospect Park (see the route on MapMyRide). During the morning commute over the past couple weeks I’ve worked up to doing around 11.5 miles. I feel pretty good when that’s done. Today we did 13.5 miles before we stopped for a few minutes at the Prospect Park Farmers Market. Today, I felt the ride when we stopped.

It was 13.5 miles full of firsts. It was my first time to bike off of the island of Manhattan. To get off the island, I went over the Brooklyn Bridge for the first time while not in a car (it’s true, until today I’d never used the bike/pedestrian  part of the bridge). Going over the bridge was terrifying. I didn’t know that you rode over the top so the cars were below you. I didn’t know the top was wood planking (which just seems like inappropriate bridge material). I didn’t know the approach was so steep. All of that made the ride over scary. And becuase I didn’t know all the ins and outs of my gears, I also worked way to hard to get to the top.

For most of the ride to the park I was at the rear of the group of 10 with Melissa, who was riding caboose to make sure no one got left behind (in some ways this was like a school field trip becuase the goal was not to lose anyone). Going through the park, Melissa taught me how to use my gears right. There’s a pretty good hill in the park, so I got good practical experience with them. I survived those hills much better than that bridge approach. Now I can say I’ve been in more than just three gears (which is about all I use on my standard commute). I’d say today I might have used half of my 21 gears.

Coming back to Manhattan felt much better. I had more confidence and stayed more middle-of-the-pack. Going across the Brooklyn Bridge again was not as nerve-wracking and, with my new-found gear understanding, a lot less strenuous. Joe, another BTC rider I met today, was right behind me with encouragement and that definitely helped.

Here’s a picture of the riders this morning. This was taken after the ride, so it’s cool that we’re all still smiling. 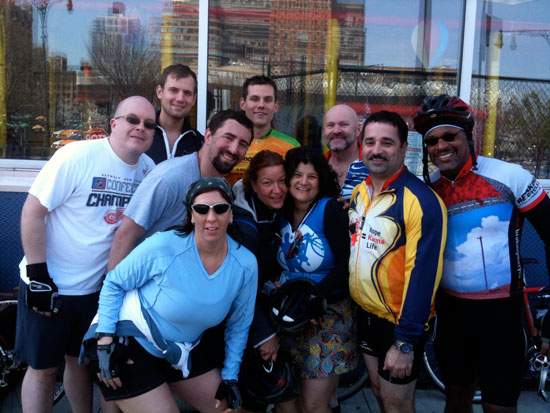 In all, over the span of about 4 hours, I rode 26.8 miles (that’s the training ride plus the distance between home and Chelsea Piers). I think I would’ve felt better afterward if I hadn’t burned my quads so bad going over the bridge the first time.

As I play with my morning commute to make those rides into training exercises, I’m probably going to do the Brooklyn Bridge on random days to get used to hills–and my bike–a bit more.

Last week I did some bike upgrades. I got new handlebars, which are a better style for this kind of distance riding. I picked up pedals with cages too so I can keep my feet locked on the pedals. I thought about going for clip-ins, but that was more expensive between pedals and shoes than I wanted. I sprung for a bike computer too so I can keep track of distance. These things have helped a lot to make rides more comfortable.

First Saturday in May we go 30 miles. I’ll need to do at least one more 20 I think before then and keep making the commutes count for mileage, and hills on some days.