Valley of the Dolls – A Staged Reading 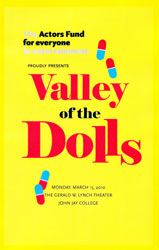 What a fabulous evening! The Actors Fund benefit staged reading of Valley of the Dolls was spectacular. An all-star cast performed the 1967 cult classic film nearly in its entirety and very literally, which amped up the camp value exponentially.

As the three lead girls, Plimpton, Blickenstaff and Anderson were perfection. Plimpton’s earnest Anne was spot on, with a bit of a knowing nod to the audience. Blickenstaff’s self-destructive Neely stole the show with the over-the-top (just like it’s supposed to be) performance. I loved how Blickenstaff gave herself over completely to the film to channel Patty Duke’s crazy performance, right down to the necklace crossing her boobs while she sings “It’s Impossible.” Meanwhile, Anderson was quieter in the role of doomed and slightly dim Jennifer.

Another standout was the integration of the film’s theme song. Dionne Warwick not only sings over the opening titles, but her vocal pops up periodically as times and scenes shift. For the staging, Murney sang all the various lyrics for the theme song while moving across the stage… sometimes sprinkling glitter snow, sometimes bringing in props and always with a huge amount of emotion. To conclude the show, the entire cast sung the last lyric. It was perfect.

Murney also had a hand in one of the touching moments of the show. As Jennifer commits suicide with an overdose of dolls, the singer comes on stage, picks up Jennifer’s script from a music stand, closes it and leads Jennifer off stage. It was perfect staging.

You also couldn’t not ask for better than Busch as Helen Lawson. It was a perfect portrayal, and the performance of “I’ll Plant My Own Tree” was magnificent. The backdrop was awesome too, mimicking the strange stage piece used in the film.

Kudos to director Carl Andress (who directed Busch in Die Mommie Die!) on a well done show. He got the most of the cast for this one-night only event. We were both thrilled we got to see it.