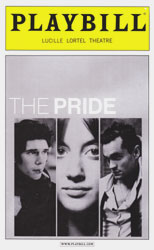 Week three of Gay-playapooloza brought us to the MCC Theatre production of Alexi Kaye Campbell’s The Pride. This play, Campbell’s first, debuted in London in 2008 and won him the Critics’ Circle Award for Most Promising Playwright and the John Whiting Award for Best Play while the production itself won an Olivier Award. The awards are no surprise as The Pride is outstanding.

The play begins in 1958 where we meet Oliver, a children’s book author, Sylvia, the illustrator working on Oliver’s book, and Phillip, Sylvia’s real-estate selling husband. The meeting is innocent enough as Oliver meets Phillip for the first time and the three make small talk and go out to dinner. The next scene jumps 50 years forward where we find journalist Oliver who has just broken up with photographer Phillip after an 18 month relationship. 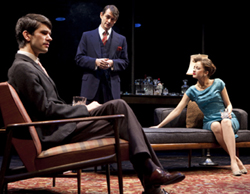 The play continues to go from one era to the next, creating a fascinating comparison of timeframes that are different and yet the same.

The Olivers are promiscuous but want to settle down with one man. The ’58 Oliver “sluts around” becuase it’s one of the few ways he can find men. The ’08 Oliver really likes doing it but when it costs him Philip he tries to figure out why he really can’t stop.

Philip in 1958 is a deeply closeted man who can’t come to terms with his feelings for Oliver and desperately tries to forget about and ignore all things gay. In 2008 Philip wants a committed relationship with Oliver and can’t wrap his head around the constant quest for sex–often dangerous sex.

The 1958 Sylvia is at loose ends as it becomes clear what’s been going on between her husband and her employer. Meanwhile, 2008 Sylvia is a friend to the two men and is doing her best to support Oliver through this breakup. Although she’s at her wits end watching Oliver trying to destroy himself. 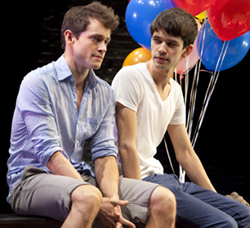 The actors make all the time travel come together beautifully. Hugh Dancy (who American audiences primarily know from films like Confessions of a Shopaholic, The Jane Austen Book Club and Ella Enchanted) plays Philip, Ben Whishaw plays Oliver, and Andrea Riseborough plays Sylvia. In addition, Adam James plays three support characters who are required–a hookup for 2008 Oliver, a doctor with a cure for 1958 Philip and a man that 2008 Oliver might take a job from. They all move in and out of their characters seamlessly. Particularly impressive is Whishaw who, during the first three scenes of act two, shifts character without ever leaving the stage. It’s the buttoning of a jacket, a shift to his stance, a change in accent. It’s very subtle but very effective.

Director Joe Mantello brings the whole package together. With the shifting time periods and rapid fire, sometimes overlapping, dialogue, the show needed a strong director to keep everything from getting muddled. Mantello was more than up to the task.

The Pride was equal parts compelling, disturbing and inspiring with the overall message being that you need to have pride in yourself. I hope more of Campbell’s work makes it to New York. I want to see what else comes from him since this first work was so excellent.