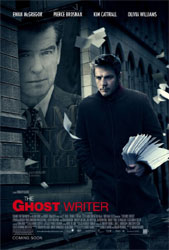 Ewan McGregor drew me into The Ghost Writer when I first heard about it a couple weeks ago. I’ve always been a fan since I first saw him in Shallow Grave back in ’94. Beyond that, a movie about a ghost writer caught up in a conspiracy around his subject sounded good.

It was later the rest of the cast, including Pierce Brosnan as a former British prime minister and Kim Cattrall as the minister’s chief of staff, added to the interest. Plus, all of his legal and personal issues aside, you can’t deny that Roman Polanski is a great director. Here Polanski keeps a very deliberate pace as McGregor’s ghost writer untangles the mess of a memoir he’s inherited from the previous writer who was found dead (wasn’t it suicide or deliberate?).

It’s difficult to write about this film and not give away anything, so I’m just going to say that I completely enjoyed the film and didn’t see the endgame until it was presented to me. After that I was like, well of course, that makes sense. Should I have seen it earlier? I’m not sure. Performances across the board were outstanding and it was especially great to see Cattrall in a role completely unlike Samantha from Sex and the City. And it was delightful to find Eli Eli Wallach in a great cameo, for which he billing that read something like “with the participation of ” (I’m not sure if that’s exactly it, but it was something like that…I’ve never seen anything like it and it sounds quite special).

There are many parallels to be drawn here between Tony Blair and the George W. Bush years in the White House. In fact the film at one point hits you over the head that that’s the era because when you see the U.S. secretary of state interviewed it is a Condoleezza Rice doppelganger. There’s also a corporation that seems to stand in for Halliburton.

This was a great movie to follow up The Crazies with, something a little more meat to it and some truly solid filmmaking. I wouldn’t be surprised if there’s some Oscar buzz around this early next year.