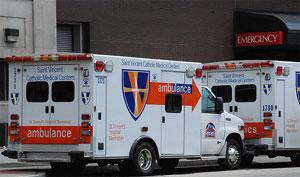 Wednesday started like any regular day–went to the gym, went to work and had a day meetings. Around 4:30 things took a turn and I started to feel crappy. By 5:30 I decided to cut out and go home. My plan was to catch a cab if I could get one as I walked to the subway… the subway won out as the cab thing just didn’t happen. I hopped on the 1 at 34th Street.

By 18th Street I felt worse than ever and opted to get off the train and have a seat on a bench to plan my next move. I got off the train but before I got to the bench, I passed out on the platform falling hard on my left knee and my face. I’m not sure exactly how long I was there, but guess less than five minutes. I eventually came to and got to the bench where I sat down and went in and out of consciousness for some span of time.

In one of the moments of clarity I met John who was standing over me. He let me know that EMTs were on the way and he kept me talking about this and that during the wait. I was a mess. I had a gash above my left eye and a cut open chin. And whatever was making me feel so awful was still a problem becuase I felt just plain sick. I was lucky and got a phone signal on the platform and called Will to let him know what happened, that I was headed for the hospital and I’d call him from wherever I ended up.

The EMTs arrived pretty quick and did some checks and, since I was more stable, I walked out of the station to the ambulance and off to St. Vincent’s we went. They processed me quick and had me in a bed in one felt like record time. They got my vitals, got me out of my bloody clothes (which except for my jackets and shoes, I told them to toss becuase I did not need to see those again) and then it was time for tests. Lots of blood work to see why I was sick, plus a CT scan to make sure I didn’t damage my head beyond the cuts.

Once the initial check in was done I called Will so he could bring me new clothes and be on the scene as well. The blood work showed an elevated white count (hence why I was sick, some infection was on the loose). The CT scan indicated no brain damage and no fractures or breaks in my facial bones.

I was in the ER for about 4 1/2 hours and that time seemed to fly by. I was impressed with everyone I encountered during this event. John gets a lot of credit for watching over me on the platform when so many people passed by (I’ve emailed and thanked him becuase he left me his card). The EMTs were great and had good humor, which I definitely needed. I saw them twice more after they brought me to the ER–once they stopped in to check on me and the other was on the way back to my bed after the CT scan. I was touched they checked in on what must be a busy shift for them. The St. Vincent’s staff from the two RNs, the doctor, the aides, the admissions person and the guy who made sure Will found me when he arrived were all great. I don’t have their names, but I would find a way to thank them all if I did becuase they made a one of the worst night’s of my life more bearable and a lot less scary. I am going to write to St. Vincent’s and hope they can pass along a thanks since I’m sure their computer shows everyone who had a part in my treatment.

Two days later I’m felling better. The infection that made me so sick seems gone. I have four stitches over my left eye, four stitches on my chin, a fat lip and a broken front tooth from the fall on the platform (maybe I should just call it a hockey fight becuase that sounds much cooler). My body hurts all over still, which I think is a combo of the infection and the fall. On Tuesday I get the stitches out and once my lip is healed I’ll go to the dentist to get the tooth repaired (I did make it to the dentist yesterday to make sure there was no dental damage that needed more immediate attention and, thankfully, there was not).

Will, of course, has been a saint. He stood by me in the ER. He’s done whatever I needed at home, which, realistically, has amounted to a lot of sleep with periodic food. He is the best!

I think there’s a short story in here somewhere too… might as well use all this trauma for something good, right?