Under the Dome: A Novel by Stephen King 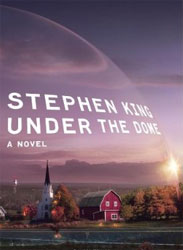 I admit, I haven’t read a Stephen King book in years. Novels like The Stand (both the original and the newer uncut edition) and It are among my favorite stories of all time. Right around Dolores Claiborne in 1994, however, I got burned out.

When Under the Dome: A Novel came out last November, my interest was piqued again. Initially the concept made me think of The Simpsons movie where the U.S. government puts Springfield under a dome because of the amount of toxic waste in the town. But as I read reviews and interviews about the book, it was clear this was something different and possible excellent. It appealed to my disaster movie loving self and so I had the book delivered to our Kindle (and boy is this is a book built for Kindle since the hardcover comes in at 1,074 pages, that’s 290 pages more than Harry Potter and the Deathly Hallows in case you’re keeping count).

As you can tell by the title and the cover image, the book focuses on what happens when an impenetrable dome comes down on the small town of Chester’s Mill, Maine. The opening chapters look what happens on Dome Day–the people and animals that die when they are in the wrong place as the dome drops, and the reaction of the town as they figure out they are trapped. In all, the book covers about a week. It’s disturbing, and yet all too realistic, how the town falls apart in just seven days.

Like The Stand, there is a struggle between good and evil here. But, unlike The Stand, there are a many shades of gray in Chester’s Mill. There is a very corrupt town selectman who is certainly on the bad side, but even he thinks he’s doing the best for the town during the crisis. Even the most morally good person finds themselves compromising their integrity to get by becuase life is very different under the dome than outside of it.

Like any good disaster movie, what makes this novel work is the human drama and this is some of King’s best work that I’ve read. How people’s live change, or end, as the crisis gets worse from day-to-day was tense and heartbreaking. There’s a huge cast of characters, including the corrupt town selectman, a 13-year-old whiz kid, a former Army lieutenant, a newspaper editor, two police chiefs, the town’s teenage thugs, two ministers, a department store owner, a physician’s assistant whose married to a cop and has two young children, a couple who made the mistake of spending a weekend in Chester’s Mill and a guy who cooks meth…just to name a few.

You also get a good sense of the impact the dome has on the environment. Early on it’s discovered that air can pass through, but very little. The same is true for moisture. Even though it’s the end of October, it ends up feeling more like late spring under the dome as the air quality gets worse each day.

I don’t want to spoil the plot since I everyone deserves to have the great reading experience I did at being excited, saddened, shocked and riveted. Without giving anything away, to me the scariest part of the book is that it’s not a big leap to see similar events playing themselves out in today’s world. Too often our politicians/leaders only act in their best interests (or the best interests of a very few close to them) and even more people are willing to blindly follow without thinking through the consequences.

I have to give up one spoiler, so skip this paragraph if you want. It was a  disappointment to discover what was behind the dome’s creation. It was reminiscent of the original Star Trek episode “The Squire of Gothos” where an alien child is tormenting the Enterprise crew. I wish the dome’s existence was caused by something else, something original. However, it is a very small complaint in an otherwise outstanding reading experience becuase the book is really about what goes on under the dome rather than how it got there.

I’m glad I came back into the world of Stephen King. Depending on what he releases next, I would be open to reading more. Meanwhile, I suggest others take a trip out to Chester’s Mill and discover what goes on when a town gets trapped.

One more note on the cover (and something you don’t get to appreciate when you read on the Kindle)… It’s a very cool wraparound image of the town and the dome the way it looks within a few minutes after it comes down. You can click on this image and see a larger version from Amazon.com.

Up next: Back to Nerdvana. I put it aside becuase I had some traveling to do and wanted to take the Kindle along instead of a book. Once I got going with Under the Dome I couldn’t put it down.