Yank! A WWII Love Story, a musical that just opened at The York Theatre Company, was the excellent second installment of our Gay-playapooloza series. The musical has been in the works for a while, premiering in 2005 at the New York Musical Theatre Festival followed by a production in Brooklyn in 2007 and a San Diego staging in 2008. Now the show is off-Broadway at the York and winning some great reviews.

The story centers around Stu and Mitch, two new recruits who make a connection before basic training is done. Mitch exists comfortably in the closet, helped by his very masculine looks and his ability to get along with the guys. Stu, early on, earns the nickname “light loafers” and does his best to be straight-acting. Stu gets saved from going into battle  by a reporter from Yank magazine (which was a real Army publication during the war). Artie takes Stu under his wing, taking him around the service showing him that gay people are the signals to look for so you’ll know who is safe. Meanwhile, Stu misses Mitch while on his Yank assignment and looks for a way to get back to him and his original unit. 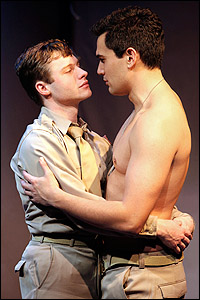 The first act is quite happy-go-lucky as we see many lighthearted and fun moments, as well as Stu and Mitch falling more and more for each other. As you might expect the act ends with them being discovered. Act two is more serious as the troops prepare for a battle that is expected to wipe out 50 percent of them. Stu is also turned in for being a homosexual. I’m not going to spoil the ending becuase that should be experienced in person.

The Yank! cast is very good, with many of them playing multiple roles. The key roles of Stu and Mitch are played  by Bobby Steggert (who we’ve previously seen in 110 in the Shade and Ragtime) and Ivan Hernandez, respectively. They are extraordinary. The two play the love and fear (both of the war and of being discovered) so well. Steggert owns the show as he tells the story as excerpts from Stu’s diary. His final scenes in the second act are heartbreaking.

Kudos must also go to Jeffry Denman for the excellent tap and ballet choreography. Tap was certainly in vogue in the 40s and there are a couple of great, energetic numbers here. I particularly liked the number where Stu met Artie. There’s also a gorgeous ballet sequence in act two where Denis Lambert and Joseph Medeiros play Mitch and Stu during a moment when the real Stu is having some powerful alcohol fueled dreams. 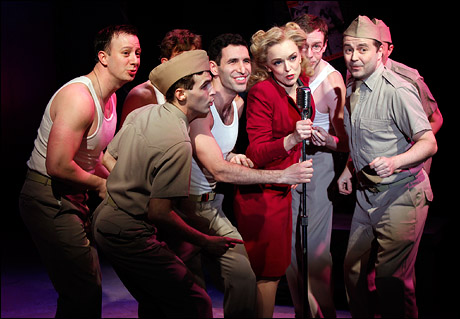 The show’s music is great and keeps to the 1940s era. Nancy Anderson appears a few times as different radio singer and belts out some wonderfully romantic tunes. Hernandez sings one of the show’s best right at the opening. “Rememb’ring You” recurs a couple times in the show as it becomes Stu and Mitch’s song. Steggert and Hernandez duets on “A Couple Regular Guys” and “Just True” are also highlights. You can check out tunes from the show on the Yank website (clink this link and follow the directions at the top of the page in the “audio” section). From those clips it seems like the show has been recorded, which would be great becuase I want those songs in my iPod.

If you’re in New York before March 16, currently the end of this show’s announced run (its good reviews may keep it open longer), definitely check it out. It is an excellent original musical.

Next week Gay-playapooloza continues with MCC Theatre’s production of The Pride.