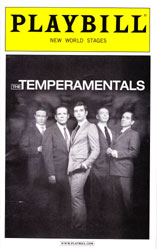 We started our gay-playapooloza this afternoon with Jon Marans’ play The Temperamentals, which started previews on Thursday for its open-ended run at New World Stages. The show premiered in 2009 as a showcase production at the TBG Theater’s 40-seat Black Box Studio, and later extended into a full two-month run at the TBG’s 99-seat space. I’m happy we finally got to see this stunning production after missing it at TBG.

Temperamentals in this context is a 1950s code word for “homosexual.” The show details the creation of the Mattachine Society, the first gay rights organization. This is a somewhat forgotten part of the gay liberation movement, which many peg to have started with the Stonewall uprising in 1969. Happening nearly 20 years before, five men–Harry Hay, Rudi Gernreich, Chuck Rowland, Bob Hull, and Dale Jennings–created the organization to bring to light the injustices faced by gays, such police entrapment, as well as help bring gay people together and out of isolation and show the importance of equality between heterosexuals and homosexuals.

Besides the formation of the organization, the show looks at the love story between communist Harry Hay and Viennese refugee and designer Rudi Gernreich (who, among other career achievements, designed the uniforms on one of my favorite 70s shows Space: 1999). As the organization grows, Hay and Gernreich deepen their love for each other, but ultimately it doesn’t survive because the times don’t allow for it as Gernreich has to “straighten up” to pursue his career. Hay valiantly lets him go.

Ugly Betty’s Michael Urie played Gernreich in the TBG run and returns here. This is my first time to see Urie in a role outside of Marc and he is outstanding as he portrays Gernreich’s conflict in becoming an activist, trying to forge a career and loving his man. Thomas Jay Ryan played Hay at TBG. He is also wonderful to watch as Hay breaks out of his closet, including leaving his wife and embracing a love of shawls.

The supporting cast–Arnie Burton (as Chuck Rowland), Matthew Schenck (Bob Hull) and Sam Breslin Wright (Dale Jennings)–all take on multiple characters in addition to their roles as Mattachine co-founders. Burton is new to the cast while Schenck and Wright were in the TBG show. All are excellent in their many roles.

Not only is The Temperamentals an excellent show, it’s an important look at history. It’s sad to note that the equality the Mattachine Society worked for is still by and large missing even 60 years later. Sure there’s been progress, but it’s a long way from equal.

Next Sunday gay-play-apolloza continues with The York Theatre Company’s production of Yank!.