A Single Man by Christoper Isherwood 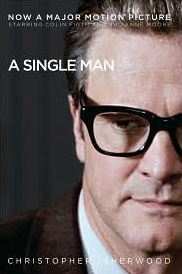 The first movie I saw this year was A Single Man, based on Christoper Isherwood’s 1964 novel. The movie was stunning so I put the book on my reading list and I’m glad I did.

This is the first novel of Isherwood’s I’ve read. His Berlin Stories (which is a collection of two novels–1935’s The Last of Mr. Norris and 1939’s Goodbye to Berlin) is the basis for the musical Cabaret and might be the next book I grab of his because I’m very intrigued by his writing style. A Single Man is unlike anything else I’ve read.

Check out this first paragraph for an example of the writing: “Waking up begins with saying am and now. That which  has awoken then lies for a while staring up at the ceiling and down into itself until it has recognized I, and therefor deduced I am, I am now. Here comes next, and is at least negatively reassuring; becuase here, this morning, is where it has expected to find itself: what’s called at home.

The book, as did the movie, follows a day in the live of college professor George from the time he gets up in the morning to some point during his sleep that night. As the reader we spend the day in George’s head as he makes his way through the day teaching, going to the gym, seeing an old friend and spending part of the evening with one of his students. It’s a typical day in George’s live following the death of his partner of several years, Jim.

Isherwood brilliantly captures all the goings on inside George’s mind: how catching something out of the corner of his eye can completely distract him, even while he continues to talk to a colleague. How he can be completely flooded with a memory of Jim in one moment and be brought almost completely down by it. Most importantly, it shows how George plays the role that is expected of him all the while he’d rather be doing something completely different.

Everyone of us does similar things throughout the day–doing one thing while the mind considers a million others. Seeing it captured on paper like this is quite breathtaking.

It’s curious some of the changes that were made for the film version (and here we cross into spoiler territory for both the book and the film so skip on to the next paragraph if you need to). Here are a couple things that I find to be interesting choices for the filmmakers. In the book, George actually declines an invitation to Jim’s funeral while in the film he’s told that it would be better if he didn’t come. In the film, George spends his part of his day setting up, and nearly performing, his suicide…but that’s nowhere in the book. In the book George is seen surviving and by the end he knows that Jim needs to be in the past and he needs to go forth and perhaps find a new Jim. The movie paints George to be far more desperate than the book does. Yes, in the book George is a sad character, but he’s not on the verge of killing himself either. The ending of the two are the same: George dies from a heart problem. In two pages, Isherwood describes when George got the condition and how it killed him. I read these pages multiple times becuase it is some of the best writing I’ve been exposed to. I aspire to do two pages like those.

Whether or not you see the film, if you’re a fan of good writing I highly recommend A Single Man. It’s a fantastic character study and a bit of a master class in writing.

Up Next: Nerdvana, an anthology that features one of my stories (it’s time to read the other stories in the collection).