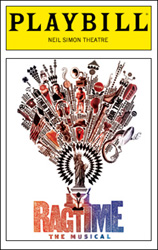 This revival of Ragtime is a first for Will and I. It’s the first time we’ve seen a Broadway revival of a show that we also saw the original Broadway cast. Ragtime originally played the Ford Center for the Performing Arts (now known as the Hilton Theatre) from December 26, 1997 to January 16, 2000. Actually, even before it’s Broadway run, we saw it in Los Angeles during it’s U.S. premiere engagement in the fall of ’97.

This revival came to Broadway in October from the Kennedy Center in Washington, D.C. with an acclaimed new, leaner staging that what was first presented on Broadway. Gone from this version are nearly 20 actors (the original boasted a cast of near 60) as well as the elaborate sets, a running model T Ford and a gigantic stage they needed to fill. If I had to guess I’d say the stage at the Neil Simon Theatre is at least 1/2 the size of the Ford Center. The Simon is, Id’ guess, also about half the audience size too.

The result is a more intimate version of this masterpiece. Here you don’t go “oooh” over the set pieces, but instead get to focus on the characters, story and music. Director/choreographer Marcia Milgrom Dodge deserves kudos for this staging where everything feels more immediate and urgent. One of her touches I liked the best was the beginning and ending scenes. (Here comes a spoiler if you don’t know the show’s plot) The show opens with Coalhouse at the piano center stage playing as everyone gets introduced. For the finale, after he’s been gunned down, everyone’s back in place as they opened the show but now no one is at the piano. 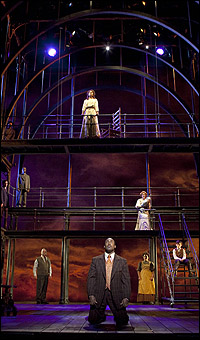 I loved the original production and saw it three or four times between the L.A. and Broadway companies. It deserved to run far longer than two years, but its producing company fell on serious hard times. I love this new production too, the smaller stage and fewer theatrical tricks does the story a great service. This new company of actors did an outstanding job. In particular I liked Robert Petkoff as Tateh and Bobby Steggert as Mother’s Younger Brother. Each brought nuances to their characters that were very welcome. The major standout though, in a Broadway debut, is Quentin Earl Darrington in the lead as Coalhouse Walker Jr. Darrington goes from trying to win his girl back to fighting for justice and he plays the role superbly. Hopefully he’ll see a Tony nomination in the spring for his work.

It’s been a rough week for Ragtime. It was announced on Monday that the show would close this coming Sunday. A burst of ticket sales, however, has extended it an additional week to January 10. It’s sad this show will close after only 90 some performances. For some reason, despite all of its acclaim from D.C. and New York press and the Tony winning score and book, the show just didn’t catch on with audiences. All I can say is, if you’re in NYC before the 10th, see this show. You will be glad you did.