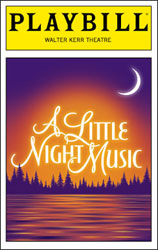 What a sublime afternoon at the theatre. The revival of Stephen Sondheim/Hugh Wheeler musical A Little Night Music is about as perfect as a musical can get. This show, in its first revival since its 1973 premiere, has super star power casting with Catherine Zeta-Jones showing that her singing and dancing isn’t only for the big screen. Angela Landsbury is also back on stage for her second time in 2009 playing Catherine’s mother. Alexander Hanson came to Broadway from the acclaimed London production and favorites Erin Davie (Grey Gardens) and Aaron Lazar (The Light in the Piazza) are also on board.

Romantic triangles and entanglements abound in this show, based on the Ingmar Bergman film Smiles of a Summer Night, about an aging actress, Desiree Armfeldt (played by Zeta-Jones). She finds herself renewing a romance with a married lawyer (Hanson) when she grows tired of her blustering soldier lover (Lazar), and the lawyer grows impatient with his resistant virginal child-bride (Ramona Mallory, making her Broadway debut). Everything falls apart, and fixed up, during an eventful weekend in the country. Two classic Sondheim tunes come out of this show, including “Send in the Clowns,” (heartbreakingly sung by Zeta-Jones), “Every Day a Little Death” (sung by Davie, who is the wife of the cheating soldier). 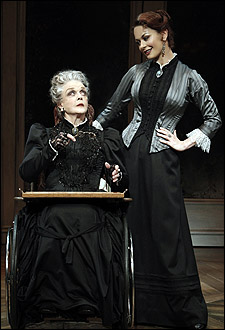 It was  a major thrill to see Landsbury in a musical role. She’s got one solo in the show with the very witty “Liaisons” in Act One, but she also is in some of the ensemble numbers as well. This is her first musical on Broadway since she was in the 1983 revival of Mame. Of course, this is not her first Sondheim. She won a Tony for her performance as Mrs. Lovett in 1979’s Sweeney Todd and prior to that, in 1974, she won a Tony as Mama Rose in that year’s revival of Gypsy. Her first Sondheim came back in 1964 with the very short-lived Anyone Can Whistle. It’s a highlight of the year to have seen Landsbury in both her roles this year, the first in this spring’s revival of Blithe Spirit.

Like many Sondhiem revivals of the past couple years (Sweeney Todd, Company, Sunday in the Park With George), this one is considerably paired down, which is surprising since Trevor Nunn is at the helm. Nunn’s responsible for some of the biggest of the big musicals, including Les Miserables and Nicholas Nickleby. Here he captures the intimacy in this show keeping the set and props minimal so the actors and the story can shine.

With across the board excellent performances, it seems a sure thing this production will be up for a number of awards come Tony time.

In honor of this production, a few different looks at “Send in the Clowns,” starting with this Zeta-Jones’s (which I presented here a few weeks ago)

A bizzaro disco version from Grace Jones, circa 1977

From the 1977 film version, starring Elizabeth Taylor (this includes the scene leading up to the song with the song starting at about 4:53. My question: How did she get cast in this movie?)

Lastly, Judi Dench from a benefit concert. She does a fantastic version. Maybe when Zeta-Jones is finished, Dench can come do a stint in the show.

And, lastly, here’s a look at Landsbury from this production with “Liaisons”