Admit One by Jenna Hilary Sinclair 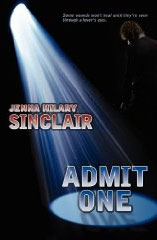 “I was so tired of being my own fortress.” – Tom Smith

I picked up Admit One because of this line from its blurb: “Months later, while Tom serves as reluctant assistant director for his school’s production of Rent, he fears that the show’s same-sex love angle will somehow out him.” Of course the word Rent jumped out and the  book was purchase was immediate.

I’m so glad I did. This was a wonderful, multi-layered book.

Tom Smith teaches high school history in Gunning, Texas, a small, conservative town. Tom is very closeted, traveling for hours to Houston or Abilene so he can be himself away from prying eyes. On one of those trips, he meets Kevin and becomes taken with this handsome man. So much so that he breaks his own rule about never hooking up with the same man twice.

Tom gets a one-two punch when he finds out his school is doing Rent and that he’s going to be the assistant director (he didn’t expect the school would get permission for it when he’d say “yes” to the position the previous spring) and Kevin turns up as a parent for one of the cast members. Tom had no idea that the daughter Kevin had spoken about was one of his own students. Kevin also had no idea about Tom, and is thrilled to find the man that had won his heart months earlier.

Now there are two things going on that might out Tom to the school and the town. To say he’s freaked out is an understatement.

While the story around how out Tom will allow himself to become is the primary story, getting Rent off the ground in this conservative town gets a fair amount of time as well. We get to see auditions, the initial parents meetings, rehearsals and how the students cope as the some of the more outspoken people in town work to get the production shut down. I’d love to see a YA novel spun out from this  becuase the students’ story would be great to read becuase there is one incredible group of kids working on this production. Admit One is not suitable for a middle school/high school audience because of the sex scenes. A book spin-off, however, could stand on its own without making reference to this book’s erotic moments.

I was angry with Tom for a lot of this book. His reluctance to come out of the closet (even though he wants to as the quote above indicates) and open himself up to Kevin was incredibly frustrating. As I was reading the early chapters I was annoyed because Tom was so full of self loathing that he’s exactly the type of person that plays into the religious right’s agenda becuase Tom is exactly how they’d like us to be–so full of sadness and loneliness that we are shut away from life. Sinclair, however, has crafted such a rich, multi-faceted character that not everything about Tom is what it seems on the surface. By the end of the book I’d laughed, I cried, I was angry at myself for being so hard on Tom. Most importantly I was left extremely satisfied.

Admit One is on the shortlist of the very best books that I’ve read in 2009.

Up Next: The short stories that make up Mistletoe Madness: Dreamspinner Press 2009 Advent Set.

In a seperate note, this is the first book I’ve read on an e-reader. We picked up an Amazon Kindle as an early Christmas present. Over the past year, we’ve discovered that a lot of books and stories we want to read are only available in an ebook format. We’ve been downloading these as pdfs typically and either reading on the computer screen or printing them out. Neither of these options make for a good reading experience.

While Admit One is available as a standard paperback, I bought the ebook version and made it my initial Kindle reading experience. I liked reading on Kindle a lot. I read a major chunk of this book on a train between NYC and Providence this past week. My eyes didn’t get tired after nearly four hours of reading and the reader is just the right size to easily hold it. I’ve used it on the subway too, and it’s a treat to be able to read while standing up since you can go one-handed with it.

I don’t think the Kindle will replace my love for buying physical books, but I’m happy that we’ve got a device in the house that means I’ll never have to deal with the unruly pdfs.