The Riddle of the Sands by Geoffrey Knight 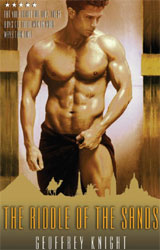 Last fall I read, and loved, the first in the Fathom’s Five series of books from Geoffrey Knight. The Cross of Sins was fun, sexy novel full of adventure and introduced us to Shane, Will, Luca, Eden and Jake who work for Professor Fathom on jobs that would make Indiana Jones proud. In The Riddle of the Sands, the five are fighting for Jake’s young friend (and possible wannabe boyfriend?), Sam, who is the victim of a slow acting poison delivered by a henchmen of book one’s villain, Perron.

To save Sam the guys have to find a pyramid that, so far, has only existed in legend. Can they find this pyramid or will it be a wild goose chase?. This book is crazy fun as they infiltrate a museum to get the supposed keys to the pyramid and then head into the desert to find where this pyramid should be.

Knight does a tremendous job writing the scenes set at the boobietrapped ancient places where nothing is quite as it seems. Getting into the Temple of Min was extremely suspenseful as four of the guys were nearly squashed and skewered by the temple’s traps. Even more impressive was what went on inside the pyramid. Even though the characters were separated into groups of twos and  threes, Knight kept the action moving for each of them with quick jumps from one group to the other. The descriptive elements were great too as there were snakes and alligators to dodge, large stone gears that can crush people, staircases that slowly collapse into slides and a pyramid that rises from the desert sand only to fall back down again. It was no surprise to read that Knight also works on screenplays because these scenes have a very cinematic quality which helps put the reader right into the action. (You can read more about Knight in a great interview over on ReviewsByJesseWave.com.)

Of course, beyond the major plot, we also find out more about the characters various subplots. A good deal of time is spent on the rift between Will and his diplomat dad. The complicated relationship between Jake and Sam is explored. Luca got more clues on his search for his father. Like the first book there’s a lot of hot, steamy sex as these guys work their way around the world on their mission.

In the interview, Knight says that he’s planned for eight books so far in the Fathom’s Five series so far. That’s great news. I’m eager to read book three, The Curse of the Dragon, which deals with a stolen, cursed diamond.

Up next: Admit One by Jenna Hilary Sinclair