Major milestones on both dance shows this week. For Dancing with the Stars it’s the end of season 9 as the top three do everything they can for the mirror ball trophy is awarded. On So You Think You Can Dance this week reveals the top 10 dancers.

DWTS, Season 9 Week 10, The Finals: The final performance show was one of the strongest, most entertaining finals this show has seen. Each couple did three dances–one of their choice, a “megamix” group dance (which included Viennese Waltz, Samba and Jive danced in unison by the three) and their freestyle. In the final show the dancers re-did one dance for a final set of judges scores. With the freestyles I was thrilled to see that each couple embraced the idea of freestyle, trying to really wow the audience with what they’d picked up during the show without getting too gimmicky or over the top. Here’s a look at the finalists dances: 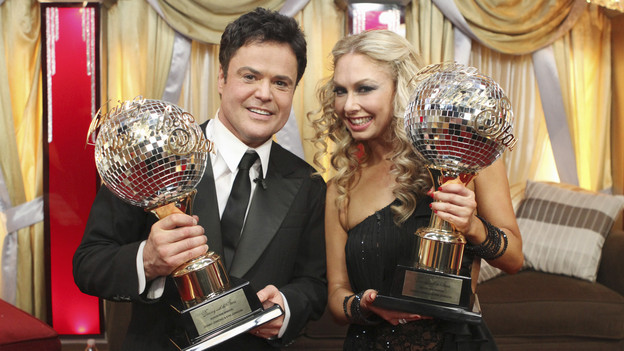 Congrats to Donny on the win! He was very deserving having grown so much every week (not as much as Kelly, but he definitely worked hard and kept improving). I am glad Mya didn’t win because I didn’t feel she pushed hard enough in this final week.

The final results show was good. I loved Donny singing for Louie and Chelsie. Aaron redoing The Muppet Show number was great. Seeing a lot of the stars do some new dances, like Melissa and Mark, was better than seeing simple redos of numbers from earlier in the season. A very satisfying end to season nine!

SYTYCD, Season 6 Top 12: What an amazing night! Across the board the dances were solid. It’s going to be difficult to see any of the dancers leave. The judges are not going to have an easy choice this week. Here’s a quick breakdown of the dances (everyone had two this week):

The two people I’d send home after all this fabulousness would be Victor and Mollee. Mollee didn’t shine enough against Nathan this week, especially in the hip hop number. Victor, while great in the tango, didn’t quite hit all the right notes in the hip hop. Since two have to go, these are my picks.

Results update: So I got it half right with Victor going home. Who knew Karen would completely blow her solo! I didn’t agree with the judges on their comments to Mollee . I felt her solo was too full of tricks and gimmacks–more desperate than fighting for her life. On the guy side, the solos were all good.  I was suprised they told Ryan he needed better solos. Poor Nathan, he looked like he’d been kicked in the head after he was told Victor was leaving. Hopefully he’ll use that to just get better.