Adam Lambert – “For Your Entertainment” 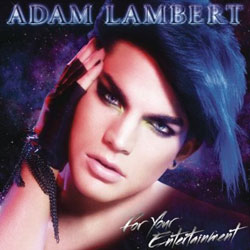 Will got me on the Adam Lambert bandwagon midway through the singer’s stint on American Idol. I’m not an Idol fan  becuase I find the show to be kind of mean spirited, but we did start recording Idol and watching Adam. By the end of Idol I had an album full of Adam songs because we downloaded his songs every week from iTunes. I love those songs and they’ve been in heavy rotation on my iPod. I’ve been looking forward to the album release for weeks to add to my Adam collection.

I downloaded For Your Entertainment first thing Monday morning and dove right into to listening. I love the album, but it didn’t exactly meet my expectations. On the whole, For Your Entertainment is a pop/dance album…and a very good one. What’s missing for me is the range that Adam showed on Idol. Where is the ballad that can give me goosebumps like his performance of “One”? Where is the hard driving rock song like “(I Can’t Get No) Satisfaction”? Where is the slow burning sensuality that he brought to “Ring of Fire”? I wish the album had more diversity. It’s just a first album though and I expect he’ll be a lot like Madonna—reinventing himself constantly and bring us something new with each album.

I like everything on the album, but there are some standouts in my first few listenings. “Music Again” is so much fun. It was a good opener for the album because it packs a good beat and he immediately gets to show off his range. “Strut” is also danceable fun. “Whataya Want from Me” slows things down a  bit and brings out a bit of Adam’s ballad side.

The title track is great! As everyone well knows it was the source of great controversy as Adam performed it to close Sunday’s American Music Awards show. Sadly there are no clips on YouTube of the performance. I’m sure ABC and Dick Clark Productions are policing to keep that off the site. I enjoyed the performance because I would run it here happily. My complaint on the performance was that it seemed overdone. There is such a push to have over-the-top performances at these awards shows and I think the music gets lost in it all. It seemed like Adam was channeling something between David Bowie from the 70s and Robert Palmer from the “Addicted to Love” era.

Did ABC overreact editing it for the West Coast and uninviting him to today’s Good Morning America? I think so and I’m disappointed with ABC for behaving the way it did. The performance was at about 10 minutes before 11, already in the safe harbor for all but the Central timezone. Adults should grow up and change the channel rather than run to the FCC to gripe about it. Did Adam get out of control? Yes, he admits that there was improv that shouldn’t have been there. Should it be a top news story two days in a row? Probably not.

Adam on CBS’ The Early Show, which quickly invited him when GMA kicked him out, was great. He answered questions head on about the AMA performance and said that he probably has a double whammy against him since he’s a gay man. Some of the female artists who’d performed earlier that night didn’t have criticism leveled for their risque and non-child-friendly numbers. I’m glad he didn’t apologize. He’s right…he’s not a babysitter. Parents should TiVo and preview for their kids and anyone is welcome to tune out. You can read more of what he said on CBS on The Early Show website.

Of course his performance was time-slot appropriate as he gave straight forward renditions of “Music Again” (seen below) and “Whataya Want from Me.”

Meanwhile, does anyone remember that the actual Idol winner Kris Allen put out an album last week? Seems like he got lost in the shuffle somewhere.