This week Dancing with the Stars revealed the celebrities who are in the final four, meaning the semi-finals, and So You Think You Can Dance got the audience involved as phone voting opened for the first time this season.

DWTS, Season 9 Week 8: The stars got put through their paces this week with two full dances to do, one ballroom and one Latin. The Latin had a new twist: it had to be done within a specific era from the 60s to the future. This part of the show ruled the night and provided some of the highest scores of the season. 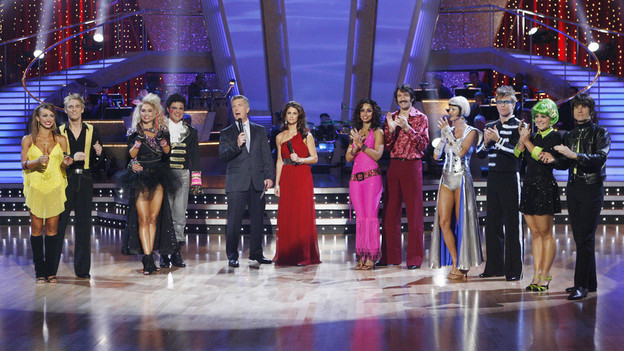 Here’s a look at the top five couples this week, in order of their performances from Monday night:

The results show was difficult this week becuase I like each of the dancers. Aaron ultimately fell. I can’t say I’m displeased with the final four, but if you were going to keep the better dancer Aaron should’ve stayed and Kelly should’ve gone. That said, it’s going to be a blast to see her in the semi-finals. Also in the show Mark and Sabrina reunited for the “Macy’s Design A Dance” paso doble and that completely rocked the house! It was good to see her back and looking so strong with her dancing. Also a standout last night, Chelsie and Tony dancing to Susan Boyle’s performance of “I Dreamed a Dream.” I could’ve done with out hearing her take on that song for the millionth time, but their dance made it worth the listen.

SYTYCD, Season 6 Top 16: There were some clunkers last night as some couples were pushed way outside their comfort zone. Here’s a look at all eight performances, ranked in order from strongest to weakest:

Tonight there’s finally a results show and I’ll update this post after that. My choice for eliminations are Kevin and Mollee.

Results update: I don’t understand why the judges are chosing to “invest” in Kevin. Outside his style, I don’t find him growing at all. I was sad to see Peter fall in his place. I was okay losing Pauline. Of the couples in the bottom, I was sad and surprised to see Ryan & Ellenore there. I was glad to hear why Nigel had to say to Nathan & Mollee, they do need to grow up… and all of the soloists need to do much better to dance for their lives. For me, the best were Ellenore and Peter and the rest were mediocre at best.

Best thing in the results tonight: The group dance that opened the show was awesome. I’m glad the results shows are back so we get group dances every week. Alvin Ailey of course was stunning as always. I hadn’t seen that piece before and it was a treat to see something new.