There was elation and dismay on Dancing with the Stars this week. So You Think You Can Dance got down to some serious business with some incredible and, in one case, unexpected dancing.

DWTS, Season 9 Week 7: There were multiple styles this week with the remaining couples doing dances they have not done before, as well as doing another group dance. It was another double elimination week too. The show got off to a cool start on Monday night with the pros showing the right way to do the team dances for the Paso Doble and Tango. This is the first week of this season where I haven’t hated any of the dances, though some were certainly better than others. I’ve got three top dances this week: 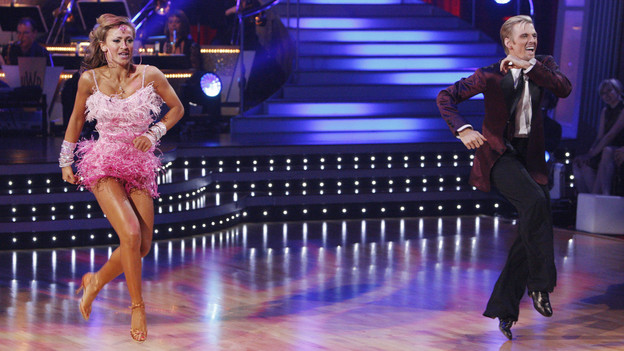 Kelly’s Salsa was so much fun and she looked great doing it. It was odd to me that Louis was moving so much faster than him too. I guess it was correct though because the judges gave her high scores. And Louis blue fringe pants were awesome! Mya’s Foxtrot was okay, but I felt like she had a plastic look on her face and she wasn’t in character. It made the dance not feel as good as it technically was. Michael also did a Foxtrot and by week seven I expect a lot more smoothness in the dancing. While he was in hold it also looked like he was concentrating too much. Poor Mark, I’ve been routing for him so much and he just had the roughest week with Lacey being sick. The Samba he did was entertaining, but also messy and the score of 19 was fair, even if it hurt to see him end up with it.

The group dances were both great. But, in the end, Team Tango (Kelly, Donny and Joanna) rocked it harder than Team Paso Doble (Aaron, Michael, Mya and Mark). The Tango folks had their act much more together, that was obvious from the rehearsal package where the pros figured the dance out and then taught it. It was inspired that they had Kelly and Joanna attack Donny to give their group even more unity. The dance was near perfection with the group parts perfectly in sync and the individual duos all performing great. I particularly loved that Donny and Kym worked in some Argentine Tango.

Team Paso, meanwhile, had some strengths but they weren’t as in sync on the group parts. Aaron, once again, was outstanding here and led his group. The rest performed quite well, but it just wasn’t as ON as Team Tango was.

Eliminations: I was elated that Michael got cut straightaway. It’s about time! Aaron in the bottom three, as I noted was disappointing. I was sad to see Mark there too, but it made sense. Aaron and Mark danced great in the knockout dance, but Aaron saved the day with another great Jive. I have to say, with two weaker dances from Mya these past weeks I would’ve rather seen her in jeopardy.

SYTYCD, Season 6 Top 18: There were AMAZING things going on So You Think You Can Dance this week. Here are my favorites from the nine remaining couples:

The bottom four and the eliminations this week, which were again judges only, were correct. For the girls Noelle and Bianca were in the bottom with Bianca going home. Bianca’s lack of character and expression in Tyce’s Alvin Ailey-flavored Broadway number kept that dance from hitting the high’s that it should’ve. Noelle, who didn’t do her best in hip-hop with Russell, was saved because of her great solo. For the boys, Phillip and Victor were in peril. Phillip blew it in the Samba with some really tentative lifts and then a mediocre solo. Victor, who was also part of the failed Ailey attempt, got saved by his powerful solo.

Next week SYTYCD opens up the phone lines and the popularity contest begins! And, in some good news, it was announced that Billy Bell can go straight into the Vegas top 100 next season and that Brandon Dumlao can audition for the show again. I’m glad the right choices were made in those case.