A Note in the Margin by Isabelle Rowan 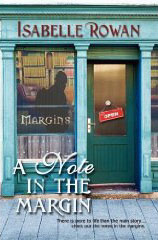 Will finished A Note in the Margin by Isabelle Rowan before I did and proclaimed it one of the best books ever. I am in complete agreement. Rowan created a well crafted romance with an unexpected character. The end result is a book with more layers than the typical book in the genre and a book that leaves you with a warm, happy feeling.

As the book opens, John has left his high stress job at the advice of his doctor. He’s taking a year off and running a small bookstore, Margins, that he just bought. During his first days, he’s not only getting used to the store and the customers, but also to the homeless man the previous owner allowed to sit in the used book section. John is encouraged to let the man stay. As John gets to know David he starts to see the man behind the homeless man he tried to ignore and that turns into a love that changes John’s live. It’s not an easy relationship to be sure. David’s been hurt a lot and it takes a lot for him to trust. Plus David has a teenage son he’s desperate to reconnect with, but he doesn’t know how to do it.

A Note in the Margin was completely unexpected. I can’t think of another romance I’ve read that involved two people who were more polar opposites. The point-of-view Rowan uses lets us get both John and David’s point of view so you engage with them both as they have their internal arguments about what their deepening relationship means. In particular you feel for David as he tries to come back from being on the streets, just barely scraping by and trying to stay alive. It takes a lot of courage for him to open up to John and that struggle makes this more than a typical romance novel.

I’m glad Will talked this book up so I’d pick it up quickly. The rich, atypical characters made it one of the best reads of 2009.

Next up: The Riddle of the Sands by Geoffrey Knight, the second Fathom’s Five book.