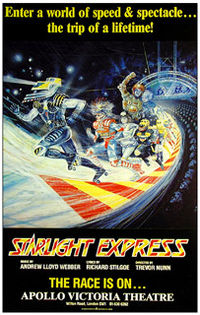 The 80s had some pretty crazy stuff going on. Andrew Lloyd Webber’s Starlight Express was one of the more bonkers attempts at a musical… and one that I love. The concept is pretty simple: it’s all a child’s dream about his toy train set coming to life and the ensuing race to see which train is #1. Is it the steam engine? The diesel engine? The newer electric train? The competition is as dirty and cutthroat as any reality show competition of today as the trains battle for supremacy and the love of Pearl, of of the many cars that connect to the train. Since it’s about trains, the actors are all outfitted to look like train cars and they are on roller skates. With its heavy costuming, this show is the perfect Halloween weekend Geek Out!

The show hit London’s West End in 1984 and by April 1991 it had become the second longest running show in London Theatre history (7,460 performances). In 1987 a heavily revised show opened on Broadway, but closed after only 761 performances. In the US, there was a tour (which I saw in Atlanta) and a long running production at the Las Vegas Hilton from 1993-1997 (I also saw it there). Where as the Broadway and London productions featured the train races staged throughout the theatre, the tours and the Vegas productions had most of the racing sequences on video, which was a little disappointing since skating through the theatre is much cooler.

Why do I like this show? It’s got a snappy score. The story is fun, and certainly original. The roller skating choreography is awesome! Sure, it’s not a show with a lot of deep meaning, but it’s crazy, campy fun.

Here are some samples of the show:

One iteration of the show that I missed and would’ve loved to have seen is the Starlight on Ice tour from 1997-98. The tour though was a flop and folded half way though its run. Germany seems destined to have Starlight running forever. It started there in a custom-built theatre in 1998 and continues to run strong to this day (a promo reel from that show is clip #1 above).