What We Remember by Michael Thomas Ford 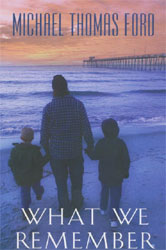 The latest from Michael Thomas Ford, What We Remember, was a great, meaty mystery. Now, I don’t read a lot of mystery so my idea of a meaty mystery and someone who read mysteries routinely may differ, but I enjoyed this book a lot.

The set up is simple, although it sets up the dark tone immediately. The body of sheriff Daniel McCloud is found seven years after his death. His family thinks he killed himself to avoid a slow death from cancer. That, however, is far from the truth. The eldest McCloud child is soon accused of the murder becuase his high school class ring was found with the body. Over the course of 300 some pages, the story moves  between the present (1991) and seven years before. As the story unfolds, Ford weaves a claustrophobic tale of small town life where typically everyone knows everyone else’s business.

Ford handles his huge cast of characters well, although none of them gets a very meaty role except for the black sheep gay son in the family, Billy. He handles the intricacies of the story very well too. A lot of characters had a hand in creating the atmosphere that caused Daniel McCloud’s death. Usually, for me, mysteries go over the top and this one stayed rooted in a reality I could believe in. The only thing I wish is that there was more of the book set after everything was revealed. I wanted to know what more of the characters thought about who the killer was and why it happened like it did.

Up next: A Note in the Margin by Isabelle Rowan. Will has raved about this book and I’m looking forward to reading for myself.