It was new dance week for Dancing with the Stars while over on So You Think You Can Dance Vegas week rolled on as the Top 20 got even closer (although I’m annoyed it’s stretching into next week… let’s get on with it already).

DWTS, Season 9 Week 4: DWTS unveiled the Country Two-Step, Charleston, Bolero and Lambada. The new dances threw curves just like they did last year since in most cases the pros haven’t done the dances either. There were mixed results and some odd judges scores too. Here’s a look at this week’s show. 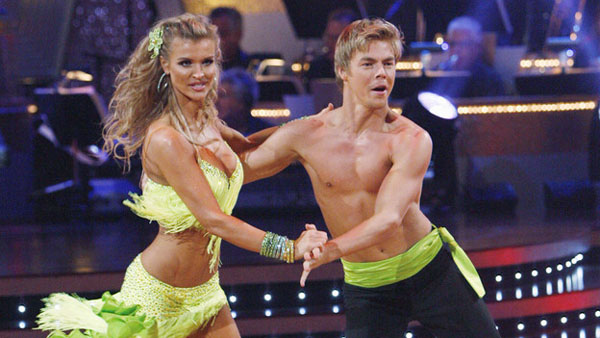 In the middle of the pack for me this week were Chuck with his two-step (he was lumbering at times, but at least there was good choreography…to me it was his best dance). Melissa’s Charleston somehow got her on top of the leaderboard, but I wasn’t that impressed with it (Mark seemed to steal that show and her footwork was sloppy).

There were more bad dances than usual this week: Aaron need to get his body under control and stop flailing about. His Lambada was just a mess. Mark’s two-step was a mess and just looked awkward. I wasn’t sure about the choreography either. It seemed more ballroom than country. Michael’s Bolero was way too posy and also suffered from poor choreography. And poor Louie…after weeks of doing good, the country two-step was nearly his undoing. For some reason he just walked through that routine. It was cool though that he went to visit Ty to learn how to be a cowboy.

I wish we’d lost Michael instead of Chuck simply becuase I think Chuck tries harder and has a better attitude than Michael. Aaron needs to improve quick though, otherwise I think he’ll be going within the next couple of weeks.

SYTYCD, Season 6 Vegas Week Parts 2 & 3: Over in So You Think  You Can Dance, Vegas continues with Mia Michaels doing contemporary, Tyce Diorio doing Broadway and the dancers constructing their own dances. Surprisingly Iveta got axed during contemporary. Krumper Russell was the start again this week though looking stunning in contemporary and in the Broadway-esque number his group put together (that was the best of the groups… and sadly You Tube has nothing up yet for me to show here). Legacy also survived and was told he’d really improved while he was in Vegas. It was moving to hear him say that doing the Mia Michaels choreography changed him.

The top 20 is selected next Wednesday. I can’t wait to see who they pick becuase there is some extraordinary talent on display there.