Week three of the dance-a-poolza brought the first dance of the season that made me cry and some stunning cuts.

DWTS, Season 9 Week 3: Dancing with the Stars was another strangely mediocre week, even though the points spread more apart than last week.  It was latin night so it was wall-to-wall sambas and rumbas, which brought out a few unfortunate performances  but also a few those stood out as pretty awesome. 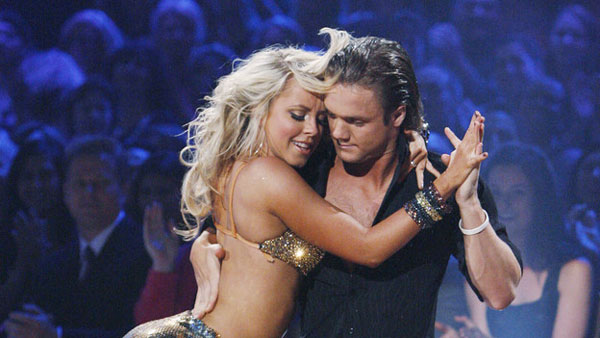 Five performances are on my favorite list this week:

The worst stuff this week came from Melissa (that samba was way too tentative). Debi (another too tentative samba and her facial expression are just sour when she looses her way), Chuck (he lumbered his way through the samba… I was appalled he was the repeat performance on Tuesday) and Tom (he tried to get through that samba with the hurt feet, but it was not quality either).

It was an odd week that Tom and Debi left the show. I was surprised they eliminated two. Doesn’t that chop a week out of the show’s schedule? Anyway, the results show was pretty fab with Queen Latifah and that Jabbawockeez performance to a “Singin’ in the Rain” remix is one of the best Macy’s Stars of Dance performances ever.

SYTYCD, Season 6 Final Auditions & Vegas Week Part 1: Salt Lake had some amazing dancers. Iveta’s ballroom was stunning and I look forward to seeing what she does in other styles. There were two great ballroom couples to with Asheligh and Ryan (both off to Vegas) and Leigh and Josh (she made it to Vegas, minus a toenail… that was gross and unnecessary to show). B-boy Bryan Boyer was also amazing, but he couldn’t get the choreography so he didn’t go to Vegas. I hope he works on his other styles so that he can perhaps make it for season seven.

Meanwhile, in Vegas it was excellent to see Nathan again. He’d auditioned for season five, but was too young and was given an automatic ticket to Vegas for season six. Ellenore Scott was amazing in her solo… one of the best solos I’ve ever seen on SYTYCD. Justin Kenney, a krumper, was so stunning dancing with Iveta during the ballroom portion of the elimination, but he was incredible. The guy I liked so much from last week’s clip, Jonathan, failed to dance for his life and he was bounced out. And, in the most shocking turn, Ryan Kasprzak was eliminated. He barely missed top 20 in season five (and his brother, Evan, made it). I don’t know what was wrong with Ryan but he was out of sorts, especially the ballroom that got him cut. I hope he tries again for season seven.