Payin’ Anything to Roll the Dice, Just One More Time 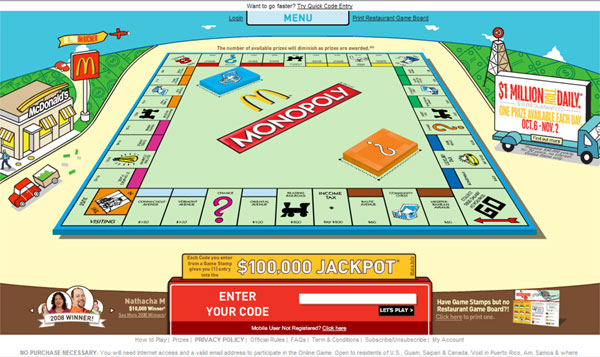 Okay, it’s not about the Journsey song (it’s the Gleek in me that had to use that headline). It’s fall and that means Monopoly is back at McDonald’s. Just like last year, I managed the website build. And, just like last year, it was a huge undertaking, something I’ve been working on since January. It would’ve never happened without a great team I got to work with–they were awesome as usual.

The game is bigger this year, with the chance to win $1 Million dollars. Check out The Jay Leno Show tonight and you’ll see how all that works. So if you’re going to McDonalds anytime in the next few weeks, pick up those game stamps and give the game a whirl at playatmcd.com (or you can play it via Facebook) then you’ll see what I’ve been up to the past few months.