Week two of the dance-a-poolza was a good one and I wish it hadn’t taken me days to get through all the shows, but it was a busy week.

DWTS, Season 9 Week 2: Dancing with the Stars was shockingly mediocre this week. Few couples stood broke out of a pack that saw the 6 and 7 paddles used extensively. Maybe it’s because it is only week 2 along with the fact there was only four days to learn the dance this week. Hopefully this is not a trend for the rest of the season. 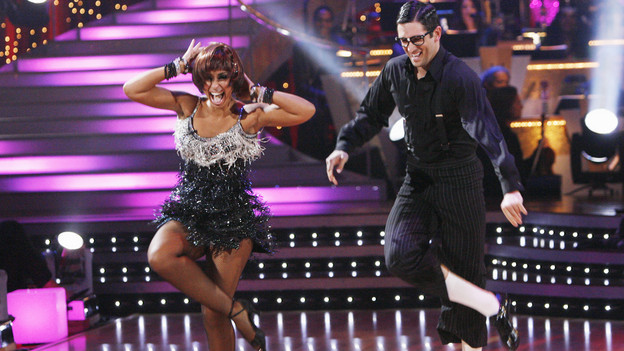 Let’s look at the few dancers that broke out of the pack. Louie had an amazing intro and a lot of fun energy in his jive. Aaron did a groovy, fast quickstep with the theme from The Muppet Show for his accompaniment. Mark also delivered a fab quickstep that I feel was underscored by the judges. Mya (shown above) delivered the best jive of the night, hitting all the right marks. The surprise of the night was Donny who was fast, precise and fun with his jive. It could be we’ve got another Osmond heading for the top 3.

Those mediocre people included: Joanna had an okay jive (Derek on the other hand was smokin’ hot). Natalie’s quickstep was okay, but she had footwork issues and desperately needs to loosen up. Chuck’s tango had some good choreography that played to his strengths but he was too stiff. Melissa’s jive was so okay I don’t even have another comment on it. Michael had a slow quickstep, which bad for a quickstep. Debi’s tango had poor footwork, but was decent overall (Major issue here was the song…why would you use “El Tango de Roxanne” when Baz Luhrmann is there? It just sets up for a lackluster comparison). After last week’s awesomeness, Kelly was a bit off her game in the tango this week with what looked like a case of nerves.

Two dancers stood out at the bottom for me: Tom’s tango was just plain boring and was then overscored with an 18 from the judges (he should’ve been much lower than that). Then there was Kathy, who was ultimately eliminated, for a slow and clunky quickstep. I was surprised that Debi was bottom two… it really should’ve been Tom.

SYTYCD, Season 6 Auditions continue: Meanwhile on So You Think You Can Dance, the audition rolled on to Atlanta and New Orleans. One of the most stunning auditions so far was Jonathan Litzler who auditioned in New Orleans. You can check out his audition above. Some other amazing N.O. dancers were ballroom dancer Kimalee Piedad, Jakob Karr and Diana Drexler, who offered the most moving and heartfelt performance. Also coming out of New Orelans were Mary’s Rules of What Not To Do: Hat down over eyes, reaching out to nowhere, rubbing your body, men’s booty shaking.

A rule of what to do should be to engage the audience, and that was a problem in Atlanta. It was amazing how many dancers seemed to be engaged to nothing but themselves. I was glad the judges called them out on it. But there were some great dancers in Atlanta with Jamal Jackson’s lyrical/African piece standing out as did a contemporary/praise dance from Thomas Hamilton (I really hope he does good in Vegas!).

Next week SYTYCD is in Salt Lake for the final audition stop and then Vegas starts up. Top 20 is getting close!