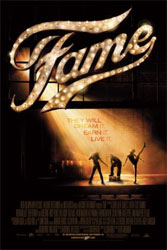 Upfront I’ll say that I enjoyed the new version of Fame, even though the film doesn’t deserve to carry the Fame brand name.

The 1980 Fame, a six-time Oscar nominee and two-time winner,  is a deep, gritty, raw and exuberant look at a collection of students at New York’s performing arts high school. This new Fame is still set in that high school and follows a group of students but the plot is shallow in comparison.

Christopher Gore was Oscar nominated for his screenplay for the nearly 30 year old film. I seriously doubt that Allison Burnett will find any awards in her future. Some scenes are lifted nearly verbatim from the original—the cafeteria jam, the solo performance of “Out Here On My Own,” the ballet dancer told they won’t earn a living as a dancer and their near suicide on a subway platform. The film’s structure is also the same as we follow a group of students from audition day through to graduation.

Unfortunately, Burnett and the creative team don’t allow the audience to connect with these characters and really care about them. We know nearly nothing about these students. One of the great things about the original was you drilled down inside the characters, such as Leroy’s reading disability, Bruno’s extremely supportive (some might say too supportive) father, the tortured soul that was Montgomery and even the teacher’s struggles like Mrs. Sherwood’s seriously ill husband. Now the plot is all quick-cut and rapid MTV pacing where character depth doesn’t seem to matter.

Yes, MGM says there were out to make a family friendly film. The original was Rated R because of the adult situations the students faced. Now the film is a PG. However, it’s possible to get that rating and still have some character development. There’s tons more character in the other family friendly musicals like High School Musical, Bandslam, Spectacular! and the PG-13 rated Step Up movies. It’s too bad this movie is lacking in this area.

I said that I liked this movie and it’s true despite the shortcoming I’ve detailed. The film is entertaining. The audition sequence is fun. The cafeteria jam is great, especially the tap dancing. The Halloween carnival and the senior year karaoke trip and the performance from Naturi Naughton & Collins Pennie is a standout. There’s also a Fosse-style dance, featuring So You Think You Can Dance alum Kherington Payne. This was the best dance sequence in the movie. 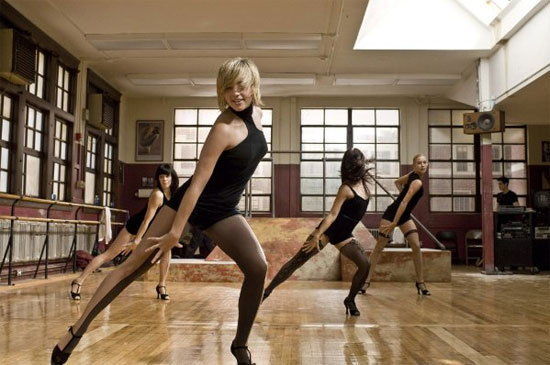 The teachers were cast well: Bebe Neuwirth as the dance teacher, Charles Dutton as the drama teacher, Kelsey Grammer as the music teacher and Megan Mullally as the voice teacher. Mullally gets to shine with her own musical number too as she performs during the karaoke outing. Debbie Allen, long a part of the Fame franchise is here too as the school principal. I’ve written before that it’s very odd she’s not playing her original character, but at least she gets a couple scenes to keep her involvement in the Fame saga.

If this film spawns a sequel let’s please get some better character development so that there’s more to remember.