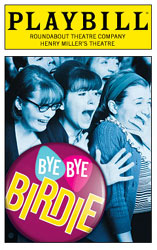 It’s hard to believe a classic like Bye Bye Birdie has not been on Broadway since the original 1960 production closed in October 1961. Forty-eight years later it’s back, having just started previews this past Thursday ahead of an October 15 opening.

The cast attracted us to this revival as much as the show itself did. John Stamos (yes, he’s got Broadway credits including the Roundabout productions of Cabaret and Nine) as Albert, Gina Gershon as Rosie, Bill Irwin as Mr. MacAfee, Dee Hoty as Mrs. MacAfee, Jayne Houdyshell as Albert’s mother, Matt Doyle as Hugo and Nolan Gerard Funk as Conrad. Add in excellent ensemble and you’ve got one excellent production. The show may be nearly 50 yeras old and perhaps today’s teens don’t know Ed Sullivan, but they certainly know about dreamy teenage boy celebrities (Funk is well known to the CW set having guested on Smallville and Supernatural and to Nickelodeon fans for his starring role in Spectacular!).

Kudos to director Robert Longbottom for assembling a cast who can make this show fresh and fun and for also not trying to just re-create the original, which featured iconic performances from Chita Rivera, Dick Van Dyke, Paul Lynde as well as choreography and direction from the legendary Gower Champion. The update Longbottom has given to numbers like “The Telephone Hour” (which you can get a sample of in the video) is outstanding.

Stamos was great as Albert, having just the right balance between mama’s boy and man head-over-heels in love with Rosie. Gershon did Chita Rivera proud with a strong turn as Rosie. She sings and acts it great and nails the “Spanish Rose” song perfectly. Funk is ideally cast. He sings Conrad’s songs great and he’s got the right rebel attitude.  It was also great to see Hoty, she’s wonderful as always even though there’s not much for her to do here. Houdyshell is a hoot! It was great to see her in the role of Mom. I think there’s a featured actress Tony nomination in her future. The one actor I found out of place was Irwin. As Will put it, he was too Bill Irwin-y, channeling too much of his clown and Paul Lynde. It was almost caricature that seemed out of sync with everyone else.

All in all though it was a great afternoon out. This was officially our anniversary show that we delayed from last week since the show wasn’t open yet. This show is a limited engagement (at least at the moment, if it has a good winter, perhaps it will extend) with a closing date of January 10. It’s definitely worth a visit if you’re in NYC this fall or during the holidays.

Also of note, Birdie is the first show at the newly renovated Henry Miller’s Theatre, which is connected to the new Bank of America Tower at 6th and 43rd. The last show at Henry Miller’s Theatre was Urinetown, which closed in 2004. With that show’s closing, the theatre shutdown for the makeover. The theatre’s facade was perservered while the rest of the facility was gutted. The Miller is now Broadway’s first green theatre as it meet all the U.S. Green Building Council’s energy and environmental leadership standards. I can say that it is a beuatiful and comfortable theatre. I look forward to seeing many more Roundabout productions here.