The Vampire Diaries: I Liked It 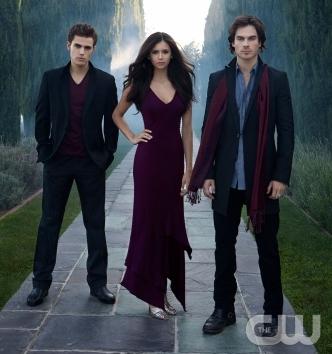 So, The Vampire Diaries premiered on the CW last week and I was really into the pilot. The tone of the show is somewhere  between the chaste Victorian/Mormonism of Twilight and the sexed-up, violent, southern-fried insanity of True Blood. And that’s a good thing. Writer/producer Kevin Williamson has taken the genres he helped create, the post-modern teen drama (Dawson’s Creek) and the post-modern horror film (the Scream franchise) and successfully combined them in his adaptation of the L.J. Smith books.

The show concerns vamp brothers (one good, one bad) and their romantic pursuit of an average teenage girl. The comparisons to Twilight are obvious and I don’t think it’s a mistake that those aspects of the story have been heavily emphasized. But Vamp Diaries is more than a Twilight rip-off and, so far, I certainly perfer this series to Stephanie Meyer’s creation.  The young cast is talented and great looking (this is the CW after all) and I’m interested in seeing where the story goes.

There was one thing about the pilot that left me scratching my head. The show apparently takes place in the South (a  teacher mentions local Civil War history) but no one in the show has an accent and the town they live in is called Mystic Falls. When I hear Mystic, I immediately think of Connecticut (Mystic Pizza) and when I hear Falls I think of the perpetually damp Pacific Northwest. The first episode of The Vampire Diaries was certainly foggy and soggy enough that you expected Bella and Edward to come strolling through any moment, and I suppose True Blood has forever informed my idea of Southern Gothic vampire storytelling (“Sukh-eh, you ahh mine!” “Oh, Beeel!”) Hopefully Vampire Diaries will clarify (or even drop) this issue in future episodes.