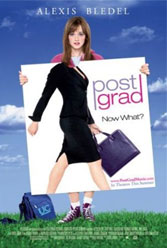 Post Grad must have looked good–and timely–on paper. “Ryden Malby graduates from college and is forced to move back into her childhood home with her eccentric family, while she attempts to find a job, the right guy, and just a hint of where her life is headed,” says the plot summary on IMDB.

Good cast too: Alexis Bledel certainly has the fan base between Gilmore Girls and Sisterhood of the Traveling Pants movies. She’s surrounded by a solid supporting cast: Michael Keaton as dad, Jane Lynch as mom, Carol Burnett as grandma and Friday Night Lights’ Zack Gilford as the wannabe boyfriend.

It’s too bad the movie doesn’t quite know what it’s supposed to be. It’s also sad that these talented people got dragged into such a medicore film.

It starts as if Bledel is still playing Rory Gilmore as she’s getting ready to graduate–in fact the whole opening sequence is something you can imagine in the GG writer’s room garbage can as being not good enough for the show.  Once we meet her family it takes on a bit of a Little Miss Sunshine feel… a vibe it never pulls off.  Then there’s the serious stuff the movie deals with as Bledel’s character tries to find work and her best friend tries to deal with his unrequited love for her. Unfortunately the movie tries to balance these different personalities and falls flat on each.

I can’t say I hated this movie, but it would’ve been far better to burn the 90 or so minutes on DVD or HBO rather than in the theater.