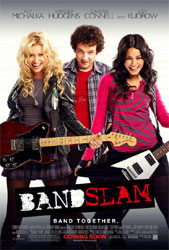 I just saw the best movie, Bandslam. It was a tough choice to make today since I had movies left over from last weekend to see (Julie & Julia and The Getaway) plus one opening this weekend (The Time Travelers’ Wife). I figured I’d like this movie. The marketing made it look like a mix of High School Musical, Glee and Spectacular! That was okay by me. But then I found it that Todd Graff wrote and directed, the same duties on a Geek Out favorite called Camp. I was sold!

The movie centers around this guy named Will, who moves to New Jersey from Ohio. He’s eager for a start where no one knows him. At lunch the first day he meets Sa5m (the 5 is silent) and is noticed by Charlotte. He also discovers there’s a rock band at this school that came in second in last year’s Bandslam, a huge high school rock festival. He’s soon helping to form a band with Charlotte and her friends who were kicked out of that second place band. He’s also working with Sam on a class project… and at the same time falling for her.

The movie has great depth, far more than you’d get from the TV ad campaign. There’s a lot of hurt, angst, joy, happiness, despair. It’s all covered. Of particular enjoyment is how Will turns around the school’s perception of him in the film’s climax. It’s an inspired moment that anyone who has been taunted will enjoy. While I would’ve enjoyed the movie if it had been a puffy HSM-esque movie, I’m glad it far exceeded my expectations. I suspect this will become a Geek Out fave in year’s to come.

After the disappointment of G.I. Joe last week I’m glad this week’s movie was fantastic. Great plot, fun songs, witty script. Of course, you know all this already becuase you’re in the movie too…

P.S.: A couple of noteworthy trailers ahead of the movie too…Where the Wild Things Are and New Moon. Wild Things looks pretty awesome.  New Moon was not my favorite book in the Twilight series, but the movie looks interesting. I am surprised they gave away the werewolf transformation in the trailer though.