Over the last week I’ve been watching a ton of BBC America. It started last week with the five night mini-series of Torchwood: Children of Earth followed on Saturday with the premiere of Being Human and wrapped up on Sunday with Doctor Who: Planet of the Dead. Spoilers lie ahead if  you haven’t seen these, be advised. 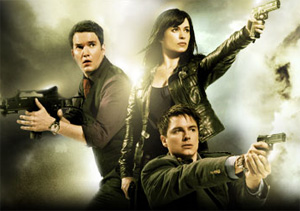 Torchwood: Children of Earth was superb. I’d fallen out of Torchwood midway through its second season. The show had gotten too over the top for me and I didnt’ feel it was worth the time to watch anymore. But the ads for Children of  Earth pulled me in and I got hooked on the first day. The plot was intriguing. Suddenly all of the children on earth stopped and spoke with voice. Over the course of the next few days we find out aliens who visited last in 1965 want 10 percent of the world’s children. In ’65 they were given a dozen children and now they want a few million. Why? The aliens are hooked to the children and use them as a drug. Yes, the children give them a good  buzz.

The governments of the world, led by the British, actually agree to give up the children in an endeavor to avoid all out war. They British government even tries to eliminate Torchwood, which typically takes on alien threats. This mini-series was extraordinarily well written, very tense, a bit creepy and cut Torchwood to the core. Key characters were killed and Captain Jack made a huge personal sacrifice. The world is ultimately saved but at huge cost. If Torchwood does another series it will be interesting to see how it’s rebooted from the very dark place the remaining characters are in.

Being Human is a new series with a fascinating premise. You’ve got three roommates: a vampire, a werewolf and a ghost trying to have a normal human existence. The pilot was crazy fun as these three try to find their way. The vampire and the werewolf have been friends for a while and they take an apartment where they find the woman who died there. They are the first to see her as a ghost, and that gives her the confidence to  be seen by more people–except for her former fiancee who still, for some reason, can’t see her. The pilot shows us that there are other vampires in the world as well and they aren’t all good people either. It’s going to be interesting to see where this series goes during the coming weeks. I’m hooked on this and look forward to next week. 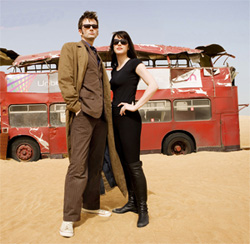 Sadly the new Doctor Who special, Planet of the Dead, was a bit of a clunker. Taking a doubledecker bus to a planet that’s being eaten by metal plated creatures had it’s fun and interesting moments, but it felt like we’d been here before. There were elements out of several previous stories, plus David Tennant seems to play the same old Doctor tricks. There just wasn’t much depth here. Plus, seeing this so soon after the Torchwood miniseries (written by the same people), I was left wanting something more substantial.

There three more “special” Doctor Who episodes before a new doctor takes over. I have to say, after some really excellent episodes between Tennant and Billie Piper as Rose and Catherine Tate as Donna, I’m ready for the torch to be passed on and for the new Doctor to come in and reboot the series yet again.

More British TV fun comes up next week as Skins begins a new series of episodes on August 6. Yay!