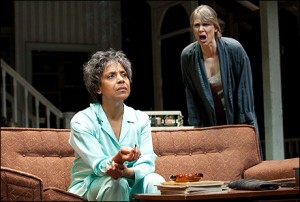 Admittedly we procrastinated seeing August: Osage County. At 3 1/2 hours it really couldn’t be done easily during the week. The show had been on our radar since it won the Pulitzer Prize and then the Tony Award last summer.

July was the month we were going to go. On May 26 Phylicia Rashad joined the cast as the “pill-poppin’, bruising matriarch Violet Weston.” I was excited at the prospect of seeing Rashad in this role. June was full of activities on the weekends, so July was going to be the month to make the trek to Osage County.

Then, out of the blue, on June 17, the weekend that lead into the Chelsea Challenge, the producers announced that August: Osage County would close on June 28. The schedule of the Challenge made it impossible to do a show that weekend. The week after that, I had already planned to see Hair for my birthday, plus I had Thursday  night hockey and we had the The Wiz too.  All of this nixed our chance to see this show.

I don’t understand the closure. Rashad was contracted for the show through August and she got to barely play a month. Her reviews, from what I saw, were good. The published attendance figures showed increased audiences each week she was in the show. I did read this today: “The 2008 Steppenwolf production of [August playwright Tracy] Letts’ new play, Superior Donuts, will be the next tenant at the Music Box  this fall. The August producers are also behind that transfer.” It sounds like the producers closed August to use the theater for this new production. Couldn’t they let Rashad finish out first? Why bring her in only to shutter the show so soon after she began?