That’s really the only word for it.

I’ve seen the show three other times: a production done at the University of Alabama by its theatre department, the 25th anniversary tour when it stopped in Atlanta and a City Center Encores concert staging here in the city. This revival, which won a Tony Award earlier this month for Best Revival, tops them all. It’s easy to see why so much praise is heaped on this production of the classic 60’s musical.

I loved it from the get-go (and note, there are potential spoilers ahead so proceed with caution if you have never seen the stage production). Sasha Allen belting out “Aquarius” is a powerhouse. Just as powerful was Gavin Creel’s soulful approach to the Act I finale of “Where Do I Go?” The production sold me even more with the staging of Claude’s hallucination in the second act. It was powerful without being over the top tacky. But director Diane Paulus saved the best for last. The death of Claude in the finale was staged in a way I’ve never seen before. The tribe peeled away, singing “Let the Sunshine In” until Claude was left in uniform on the American flag. The tribe kept singing, fading out as the got further from the stage. It was haunting, emotional and strong statement for the end of the show. 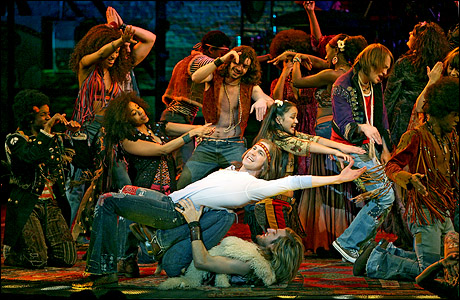 This production also radiates energy. The cast runs through the audience spreading the hippie love from orchestra to the very back of the mezzanine. (I was in the rear of the mezzanine and still got an invitation to the end of Act I Be-In hand delivered by a cast member.) And even though the tribe has done this for months on the Hirschfeld stage, they bring just the right energy that makes you believe you’re seeing these events go down for the very first time.

It was a great evening at the theatre. The perfect early birthday present to myself.