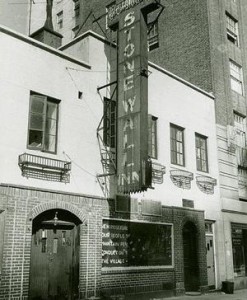 I spent a part of this afternoon at a panel discussion put together by the Ali Forney Center to commemorate the 40th anniversary of the Stonewall riots.

The riots, which started the night of June 28, 1969 and went on for several more nights, marked the beginning of the gay rights movement. On the first anniversary of the riot, New York City had Christopher Street Liberation Day, which included the first gay pride parade.

The panel, led by AFC’s Executive Director Carl Siciliano, brought together two men who participated in the riots as well as four residents of AFC’s Transitional Living Program.

Thomas Lanigan-Schmidt and Martin Boyce were both Stonewall regulars in 1969. To open the discussion they described what it was like to be gay in New York in the late 60s. Gay bashing was rampant in the city. The police turned a blind eye to the bashings and also took pleasure in raiding places where gays gathered, like Stonewall. Boyce described Stonewall as the one place “we could hold each other.” 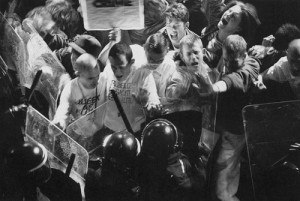 The night of the riots, the gays at the Stonewall had had enough of the police harassment and of society trying to marginalize them. Boyce was sure they were eventually going to a pay dearly for what they’d done that night, but it never came. The reaction was more like “What took you so long?”

Depictions of Stonewall often make it seem like a standoff between drag queens. While they certainly were a huge part, there were also many gay street youth involved. These kids, who had been turned out of their homes, had nothing to lose by rioting. Where the adults could face losing their jobs or their rental housing if their names got out, it couldn’t get much worse for the youth if they stood their ground. As a result of the riots, Christopher Street became a street where gays could be free.

After the background, the discussion turned to a look at how times have chagned… or not… since ’69. First up was the topic of the role of family, church and community. For many gays, it’s not always easy to find support from those groups. For Angela, one of the residents, she says “This is my life and I’m going to live my life. I have grown to not care about what people say [about me].” Another resident, Wallish, says the way he was raised and the way he felt were different. “I had to learn to love myself as I am.”

Lanigan-Schmidt told of how his parents found out he was gay. When he applied to an art school in 1967, he wrote an essay in which he described himself as a “proud homosexual.” Not only was he rejected by the school, but his parents were contacted by the school and outed him. Neither of his parents accepted him.

Berlin was thrown out of her anut’s house by her aunt’s husband. For a time she stayed at the Convenant House untl that organization made her chose between continuing with school and having a place to stay. In an effort to stay in school, she went to another housing organization where she had to often sleep on the floor with rodents scurring around. Then she came to AFC.

Looking back again at 1969, Boyce decsribed how the street community took care of each other. It was a tough life, he said, but even though there were often arguments, everyone worked to keep each other safe.

Lanigan-Schmidt said he was proud of the AFC panelists because there was a lot of courage and hope there. Each of the AFC panelists is currently working and going to school full time. Among the majors of the panelists were mortuary science and writing/literature. In terms of working, one panelists works with an organization to provide eye care to youth, another works in HIV prevention and still another interns with a top fashion design house. Certianly an impressive group of young adults.

The panel was an enlightening couple of hours. It’s sad though that after 40 yeras there are still so many struggles that LGBT people face. But both Lanigan-Schmidt and Boyce agreed that there has been a lot of progress since the riots, even more than they’d believed possible at the time.