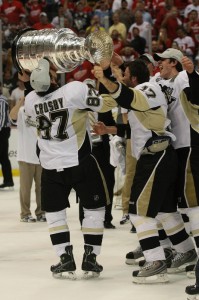 It’s been another exciting NHL playoff season for me as my two favorite teams advanced and advanced to come together again in the Stanley Cup finals.

For the past two weeks, the Detroit Red Wings and Pittsburgh Penguins have battled it out. Tonight it game down to Game 7. Yes, I wanted to see Detroit raise the Cup on home ice (last year they won in Pittsburgh). Unfortunately  by the time the Red Wings woke up mid-way through the second period the Penguins were already up by two and Penguins goalie Fleury wasn’t going to go down without a fight. His saves were amazing, especially in the final seconds of the third period.

It was really a goalie game in this series and both Fleury and Red Wings’ Osgood both played top notch games. Yes, Fleury had a bad game five, but more than redeemed himself in six and seven.

And that’s it for the NHL season. Maybe next year these two can make it best two out of three and meet all over again in the finals! This matchup just doesn’t get old for me.