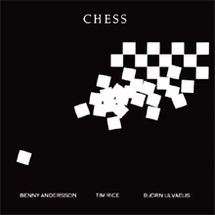 Well before Mamma Mia became a worldwide musical smash, ABBA’s Benny Anderson and Björn Ulvaeus wrote an original musical with lyrics from Tim Rice (Evita, Jesus Christ Superstar). For Anderson and Ulvaeus, this was their first outing after ABBA broke up. The result was a musical about two chess players, a Russian and an American, involved in a world chess championship and a woman who manages one and falls in love with the other.

Chess started as a concept album in 1984. I remember eagerly picking up this album when I was 16. I was already an ABBA fan, owning all of their albums, and very into musicals and this fed into both. I didn’t so much care about the plot becuase the music was so good. I’m sure everyone remembers the hits from the concept album:

Murray Head’s “One Night in Bangkok”

Elaine Page & Barbara Dickson “I Know Him So Well”

As a stage musical, Chess has had a rougher time. The show premiered in London’s West End in May 1986 where it ran until April 1989. The show would have been very interesting to see since it’s first director was A Chorus Line’s Michael Bennett (who had to drop out for health reasons). Trevor Nunn (Les Miserables) took over the show and got it up and running to mix critical reviews.

The show had a far more difficult time in the U.S. The show’s book was completely re-done and Nunn reimagined the show creating a show that was completely different from both the concept album and London’s staging even though most of the songs remained the same. The show opened on Broadway on April 28, 1988 and closed on June 25 that same year. Interestingly, anytime the show is performed in the US, it is done so with what is considered to be the less-than-perfect US book written by Richard Nelson becuase there are contract stipulations that prevent the London version from being performed here.

Still over the years, many of tried to revive the show by reworking the book to make it more modern (since the original is set during the cold war). Often new productions attempt to mix a combination of the best parts of the London production with the best parts of Broadway.

Next week (June 17 in New York), PBS stations will start airing Chess: In Concert as part of its Great Performances series. This concert, recorded last May at London’s Royal Albert Hall features Josh Groban as the Russian, Adam Pascal (from Rent and Aida) as the American and Idina Menzel (Rent and Wicked) as the woman. Groban and Pascal performed these roles in 2003 as part of an Actor’s Fund Concert fund raiser in New York. That concert let to some  buzz about the show coming back to Broadway, but that didn’t come to fruition.

According to Tim Rice, in a note in the concert’s program. This is now the “official” version of Chess. The concert’s website has an excellent trailer for the concert, which I cannot embed  here. But, there are some sneak peeks that I can provide.

This is a PBS interview with Groban that has some good preview footage.

This is video recorded by an audience member at the concert, featuring Groban singing my favorite song from the show, “Where I Want to Be.”

For those who want to own the concert, a DVD and CD also release next week.