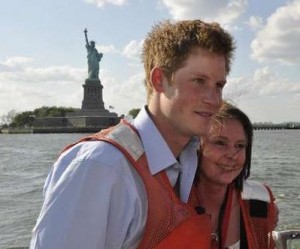 Yesterday was a beautiful day and we decided to eat lunch outside to enjoy it. That meant we were at one of our favorite spots to eat, Southwest NY because it has great outdoor seating that over looks the river.

We’re chatting away, waiting for our food to arrive when I notice this gaggle of suits coming on to the esplanade from between 4 World Financial Center and the New York Mercantile Exchange. There were also a number of NYPD on the scene.

Initially we thought it was possibly President Obama and the First Lady who were due to be in the city yesterday. The suits, along with a few ladies in dresses, all boarded a Coast Guard boat that was parked in North Cove and, after putting on life jackets, they headed out along with two smaller Coast Guard boats as escorts. The photo above is one of the press photos shot while the Prince was on the boat.

After lunch we went for a walk and came upon a group of well-dressed folks (it looked sort of like an Easter Parade with all the hats!) headed for the ferry terminal. One of the staff herding these people had a badge indicating this is for the Veuve Clicquot Manhattan Polo Classic out on Governor’s Island. We had no idea polo was played in the city.

Once we got home, I started to look up what was going on today. Turns out it wasn’t President Obama at all. It was Prince Harry we’d seen board the boat on his way to the polo tournament where he was raising money for Sentebale, the charity that Harry has set up with Prince Seeiso of Lesotho to help poor children and AIDS orphans in that small African nation surrounded by South Africa. Prince Harry made the news on Friday, his first day in NYC, as he named a garden in lower Manhattan and visited Ground Zero. We didn’t know he was in town, but there he was.

Too bad we hadn’t been a little closer to get a better look. But at least we were in close proximity!

So, about the Fuzzy Ducks… While we were walking and trying to figure out what was up with the Easter Parade, we stopped by the Koi pond on the esplanade. We not only got to check in on the fish, but there were three mallard ducks there along with two very small  babies, who looked to be covered in fuzz more than feathers. So very cute!!!! Sadly I didn’t have my camera on me to get pictures of the cuteness.