There’s stiff competition in many of these categories. I believe Next to Normal will come out on top in at least Best Book, Best Score and Leading Actress. The book is the most complex of the nominated shows (against Shrek, Billy Elliot and [title of show]). Next to Normal deals with a family with a bipolar, delusional mom, a dad doing everything he can to help, a daughter who is trying to get out from under her brother’s shadow while finding her own way with her first boyfriend. It does so in a straight forward, honest, emotional way. The score is the perfect companion. I’ve posted some clips in my previous posts here and here and here is another couple of songs for your enjoyment.

First Alice Ripley’s powerhouse “I Miss the Mountains,” which looks at what all the drugs are doing to her.

Here’s J. Robert Spencer’s dad Dan as he relates how he’s the one that’s always been there for his wife.

Aaron Tveit was somehow left out of the nominations (I just don’t get that). Here’s his impish Gabe shouting out that he’s alive.

And here’s daughter Natalie, played by Jennifer Damiano, as she sings of Mozart.

I’m not sure how Next to Normal will fair against Billy Elliot for Best Musical. Billy is a great musical in its own right while Normal has a greater depth to it. It’ll be interesting to see how the votes go come 10:55 next Sunday night when that prize is handed out at the end of the Tonys.

If you want to experience Next to Normal in a different way, check out the show’s Twitter feed. Staring in early May the show began feeding the entire plot as if it were tweets between the characters. It’s been a fascinating. A different scene is done each day, including links to the relevant songs. I’m not sure how this reads if you don’t know the show at all, but I’ve found it enjoyable. Here’s a sample (read from the bottom up so you get it in order): 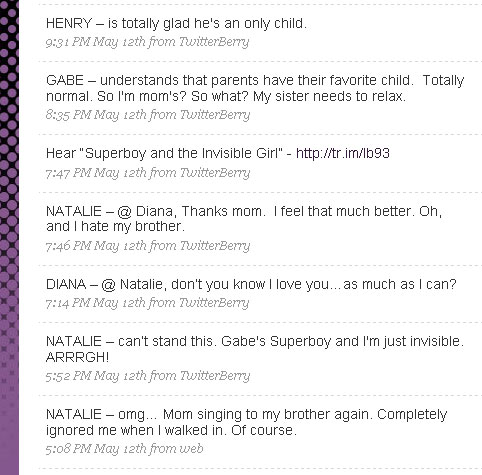 If you decide to check out the Twitter feed, my advice–as it was above–is to start at the bottom and work your way up so you get everything in order.

Meanwhile, make sure to check out the fab Next to Normal cast on the Tonys, Sunday June 7 on CBS (and if you’re in New York… go see this great musical for yourself!)