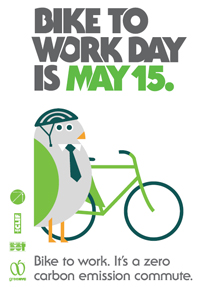 I participated in my first National Bike to Work Day on Friday, which happens to fall right in the middle of Bike Month in New York City. Of course, participation was easy… I only had to ride like I normally do. But, it was good to be part of the bike day and there were more bikes on the road during the commute Friday than usual.

It was a good ride week all around. The weather, however, did pull a fast one on me Thursday and I didn’t ride. There was a huge blob of rain to the west on the radar Thursday morning along with a high percentage of rain for the day, so i didn’t ride. Well, not one drop fell during the morning commute (and really, from the radar picture I’m not sure how that happened). And it was fine to ride home in the evening. It was so close to a perfect ride week. I’m going to start taking the weather radar with a grain of salt and make more choices based on what I see out the window in the morning.

Of course, with Bike to Work Day there was a decent amount of media coverage about biking in the city.  NBC4, for example, offered “More New Yorkers Shifting Gears from Costly Commute,” which was a piece about the day, how 185,000 people started using their bikes in the past year to commute and how New York City has 620 miles of bike paths, lanes, routes and car-free greenways. What they don’t talk about is finding a good place to park.

I’m lucky, there’s a nice No Standing sign pole right out side the building I work in and I park there everyday. However, I almost got a rude shock on Wednesday. The city was painting poles on 38th Street. The painter had three options with my bike parked there: cut my lock (which he had the tools to do) and have my bike impounded by the police for the cost of $175, cut my bike in half (which he also had the tools to do and could do faster than cutting my lock) and just leave it on the curb or paint the pole and if my bike got painted in the process too bad.

Why can he do all this to my bike? Parking on a pole can be considered trespassing on city property.

The guy painting on 38th Street was nice. He came into the building and asked the desk guy if he knew whose  bike was on the pole. Luckily I chat with the desk guy often and he knew it was mine so he came up to the office and told me what was up so I could move the bike. Well, were to move it too? There’s no real bike parking on 38th between 5th and 6th. I moved to a pole down the street the painter had done earlier and was already dry.

The city is so excited to hype the amount of bike lanes they’ve got… but they really need to up the available parking and/or get  buildings to allow bikes to be brought inside for storage. Most of all, the city shouldn’t consider it trespassing if I park on one of their poles. You can’t encourage people to ride and then give them no place to park.

Anyway… as I said, it was a good ride week. The weather was mostly beautiful and spring-like. I adjusted and raised my seat this week, so I’m getting more pedal power which is good. I’m please I rode 4 out of 5 days this week, plus of course the Saturday back and forth to the rink a couple times. Next week is looking good. Based on the extended forecast, I might get 5 for 5 next week. Here’s hoping!