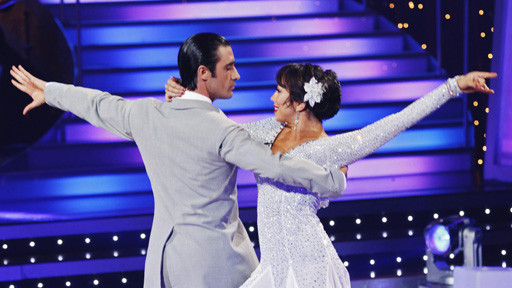 And then there were four… It was a great show this week with another round of two dances for everyone. I did think the ballroom portion was absolutely incredible. The Latin was good, but it was the ballroom that really dominated for me. I liked how they padded the show out this week. It didn’t feel as forced as last week with the couple’s looking back on their breakthough dances. Here’s this week’s recap:

Melissa & Tony: (Ballroom: Quickstep)  Okay, last week I was confused becuase of the super high score where it didn’t feel deserved. This week I’m confused by lower scores. The quickstep was excellent. The musicality ruled, especially the choreography in the middle instrumental portion of the song. It was simply stunning. I didn’t understand Bruno and Carrie Anne’s issues here. (Latin: Cha cha cha) The judges seemed extra harsh here as well. It thought this was a really good complete package. Maybe it was pick on Melissa week?

Gilles & Cheryl: (Ballroom: Waltz) Everything about this was gorgeous. Cheryl did beautiful choreography and Gilles played the smooth role so well. This was a well deserved 30 that had moved me so much (and this is the kind of dance I’d like to do with Will someday, so smooth and romantic). (Latin: Salsa) Another impressive turn by Gilles that was also worthy of that 30. He came at that fast and fun. Tonight we really saw the Gilles of old, who had been missing for the past couple weeks.

Shawn & Mark: (Ballroom: Argentine Tango)  Go Shawn! She took that character she found for the paso last week and unleashed it here to great effect. Mark did a great job with the music and Shawn really nailed it. This tango is so precise, it’s right up her alley so it was no surprise to see those 10s. Stunning! (Latin: Jive) This too seemed pretty solid technically, but I agreed with the judges who seemed to note it ran out of steam. I thought Shawn wasn’t really connected to this dance. Mark was so animated, but she just smiled. It wasn’t bad, but it also didn’t sell.

Ty & Chelsie: (Ballroom: Viennese Waltz): I had such high hopes here becuase he usually does ballroom so well. I think his nerves got the better of him tonight. There were some stumbles/missteps here and occasionally he seemed to want to move too fast. It was a very decent effort, but just a bit off. (Latin: Samba) I think this was his best Latin. He may have even had fewer missteps here than in his waltz. But still, it wasn’t quite semi-final material, especially compared to the three that came  before him.

Results Prediction: It really needs to be Ty who goes home this week. It really wouldn’t be fair to have him in the finals and the loss of one of these other constants. That said, if there’s to be an upset, I think it will be Shawn that departs.

Results Update: Farewell, Ty. It was fun, but it was time for you to go. Stars of Dance with Derek, Mark, Julianne and Lacey was very cool. The pro dancers were great too, although Anna certainly danced Mayo under the table. Hopefully we’ll still get to see him in some capacity in the future because I quite like him. I’m looking forward to next week’s big finale!