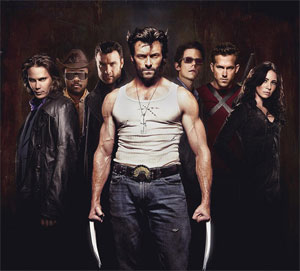 The X-Men franchise set an impossibly high bar for itself with the stunning first two movies: X-Men (2000) and X2 (2003). Those films were big superhero, effects filled movies that had very compelling plot lines. The franchise slipped with the more effects and less story effort that was X-Men: The Last Stand (2006). Now with X-Men Origins: Wolverine out this weekend we get a story that was hinted at in X2, but still lacking the storytelling of those first two installments.

Hugh Jackman’s Wolverine is the centerpiece of this picture. We get the story of Jimmy (who becomes Logan who becomes Wolverine) and Victor. Mutant brothers who at some point stop aging. That’s not really elaborated on, but we meet them as kids and watch them grow up to become Jackman and Liev Schreiber and watch them go through many years without aging. The bulk of the picture seems to take place some 10 to 15 years before the first X-Men movie.

Logan, along with Victor and a handful of other mutants work for Col. Stryker without realizing that they are helping Stryker wage a war against the mutant population. Logan, after killing too many people, bows out and decides to lead a life outside the military. Which works for a few years, until Stryker decides to bring him back into the fold. We saw Stryker in X2, so we know Logan was involved in some of his evil experiments. Big showdowns ensue were many die and lots of things blow up and we end up with an even better understanding of why the present day Logan is the way he is.

We also get the origins of Sabertooh too because Logan’s brother eventually becomes Sabertooth, who we saw in X-Men (played then by Taylor Mane). We briefly see Scott Summers/Cyclops while he’s still a kid. Gambit is also introduced for the first time in a movie (and hopefully we’ll see more of him because Taylor Kitsch, from Friday Night Lights, does a great job with him). Professor Xavier shows up at the end too to pick up the mutants Logan has set free from Stryker’s lab. It’s odd that Patrick Stewart isn’t credited and honestly looked like a special effect in the movie… made me wonder if they cobbled together voice and appearance from other films.

All-in-all this was a good way to start off the summer movie-going season.

There’s another Origins movie due in 2011, this time focusing on Magneto. Hopefully this one will pack a bit more story substance. I’d love to see this franchise get back to the story telling that made the first two above and beyond the standard superhero movie.